Very Washington DC: A Celebration of the History and Culture of America's Capital City (Hardcover) 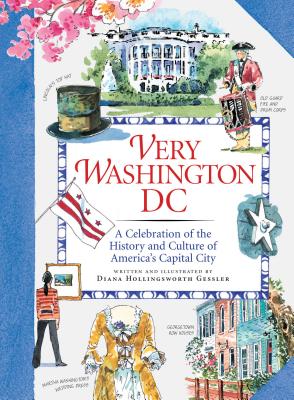 Very Washington DC: A Celebration of the History and Culture of America's Capital City (Hardcover)


Not On Our Shelves—Ships in 1-5 Days
A travel guide with character, this fact-filled keepsake offers all the history, beauty, charm, and culture of our nation's capital city. In eye-catching watercolors and detailed sketches, artist Diana Gessler captures the allure that makes Washington DC one of the most visited destinations in the country. In addition to the national landmarks, stirring memorials, and vibrant neighborhoods, there's the Cherry Blossom Festival, the Twilight Tattoo (a military pageant featuring the Old Guard Fife and Drum Corps and the U.S. Army Drill Team), colorful row houses, famous hotels and restaurants, and more museums than you'll be able to visit in just one trip.

Gessler covers the city's most popular attractions but also heads off the beaten path to share hidden gems, like the quirky Albert Einstein Memorial and Eastern Market, where you can dine on bluebucks and browse for flea market finds. Also included are an index of sites and a useful appendix of addresses, Web sites, Metro stops, and phone numbers.

Very Washington DC is a picture-perfect guidebook—a one-of-a-kind memento for tourists and a cherished reminder of the city's riches for those who have always lived in America's hometown.

Diana Hollingsworth Gessler is the author and illustrator of Very New Orleans, Very Charleston, and Very California. Her watercolors and oil paintings are represented by Shaw Gallery in Naples and Bonita Springs, Florida. She and her husband live in Melbourne, Florida, when they’re not traveling.

“Illustrator and author Diana Gessler captures the magnetism of the Nation’s Capital through use of vivid watercolors and detailed sketches. . . Her writing style is simple and fresh. . . Very Washington, DC is just as stunning as the city.”--Washington’s Finest

“Diana Hollingsworth Gessler has forged a fascinating career out of illustrating and writing the text about fascinating American cities or states . . . Her work consists of handsome watercolors and oil paintings of prominent sites, and quirky descriptions of places, people and things.”—Akron Beacon Journal