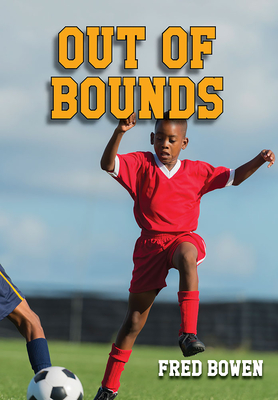 This is book number 20 in the Fred Bowen Sports Story Series series.

Eighth-grader Nate Osborne is a forward on his soccer team, the Strikers. Like the rest of his team, he can get competitive, especially when it comes to playing against their rivals, the Monarchs. The Strikers desperately want the Monarchs to lose. They even root against them when they play other teams.
During a game against the Monarchs, Nate has to decide between going for a goal after a player on the rival team gets injured or kicking the ball out of bounds as an act of good sportsmanship. His aunt has always taught him the importance of fair play, but will he lose the support of his team if he does the right thing?
Out of Bounds is an entertaining yet thoughtful story about young athletes struggling with teamwork and sportsmanship. In the afterword read more about famous instances of exceptional sportsmanship on the soccer pitch.
Fred Bowen was a Little Leaguer who loved to read and is still a lifelong sports fanatic. He is the author of the action-packed Fred Bowen Sports Story series, currently totaling more than twenty titles. For thirteen years, Bowen coached kids' baseball and basketball teams. He has also written a weekly sports column for kids in the Washington Post since 2000. He was a lawyer for many years before retiring to become a full-time children's book author.Bowen lives in Silver Spring, Maryland, with his wife Peggy Jackson. They have two grown children.
"Bowen understands the dynamics of our sport, its nuances, and the give-and-take of a soccer match, especially among young players. . . You'll be entranced until the last shot on goal" —Soccer Wire

"Bowen tucks in plenty of soccer action —plus a chocolate chip cookie recipe—and closes with some real-life sports incidents that exemplify the principle he wants to highlight." —Booklist Online