King & Kayla and the Case of the Missing Dog Treats (Hardcover) 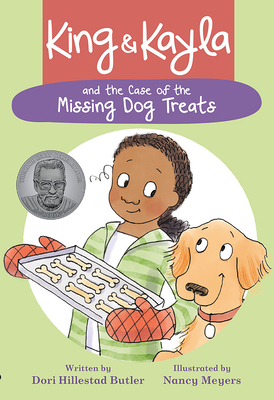 King & Kayla and the Case of the Missing Dog Treats (Hardcover)

This is book number 1 in the King & Kayla series.

King & Kayla are back on the case in this laugh-out-loud mystery from the Theodor Seuss Geisel Honor Award-winning series.
Kayla made peanut butter treats for Thor, Jillian's new puppy. But now the treats are missing, and King is under suspicion. Analytical Kayla notices that King's breath doesn't smell like peanut butter, so he didn't eat them. Sensitive King detects the presence of an intruder in their house. Is it Jillian's little brother Adam? Or someone else? Who took the missing dog treats?
With simple, straightforward language and great verbal and visual humor, the King & Kayla series is perfect for newly independent readers. King and Kayla model excellent problem-solving skills, including working as a team, gathering facts, making lists, and evaluating evidence.
Dori Hillestad Butler has published magazine stories, educational materials, plays, book reviews, characters for a board game, and forty-two children's books. A two-time Geisel Honor Book winner, she has also been nominated for children's choice awards in nineteen different states and won the 2011 Edgar Award for the best juvenile mystery for Buddy Files: Case of the Lost Boy. She lives in Washington.

Nancy Meyers is a graphic designer and illustrator and the proud owner of Sullivan, golden-doodle extraordinaire! She lives in Minnesota.
"Readers will connect with this charmingly misunderstood pup (along with his exasperated howls, excited tail wagging, and sheepish grins)." —Kirkus Reviews

"A perfect option for newly independent readers ready to start transitioning from easy readers to beginning chapter books. Transitional readers are always in demand, and this series is a worthy contribution to any collection serving brand-new readers." —School Library Journal

"A delightful series start that will have kids returning to read more about Kayla and King. It's also a great introduction to mysteries, gathering facts, and analytical thinking for an unusually young set." —Booklist