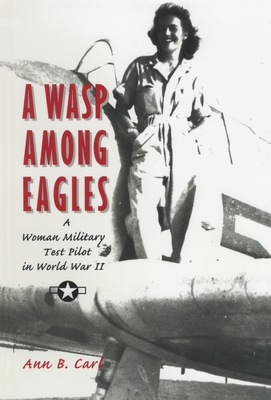 
Special Order—Subject to Availability
Before World War II most Americans did not believe that the average woman could fly professionally, but during the war more than a thousand women pilots proved them wrong. These were the Women Airforce Service Pilots (WASPs), who served as military flyers on the home front. In March 1944 one of them, Ann Baumgartner, was assigned to the Fighter Flight Test Branch at Wright Field in Dayton, Ohio. There she would make history as the only woman to test-fly experimental planes during the war and the first woman to fly a jet.

A WASP among Eagles is the first-person story of how Baumgartner learned to fly, trained as a WASP, and became one of the earliest jet-age pioneers. Flying such planes as the Curtiss A-25 Helldiver, the Lockheed P-38, and the B-29 Superfortress, she was the first woman to participate in a host of experiments, including in-air refueling and flying the first fighter equipped with a pressurized cockpit. But in evaluating the long-awaited turbojet-powered Bell YP-59A, she set a “first” record that would remain unchallenged for ten years.
ANN B. CARL was the first American woman to fly a United States Army Air Forces jet aircraft.
“A jet-age pioneer, Carl was the only American woman to test-fly experimental planes during WWII and the first woman to fly a jet. She was one of about a thousand WASPs (Women Airforce Service Pilots), women military flyers on the home front, who—with zero publicity and very low status—ferried planes to bases, served as flight instructors, and test-piloted repaired aircraft. This extraordinary memoir is a spirited, timely story about staying aloft in a male-dominated profession.”—Publishers Weekly

“[Carl] is as skilled a scribe as a pilot [and her] words flow precisely and compellingly.”—Stars and Stripes