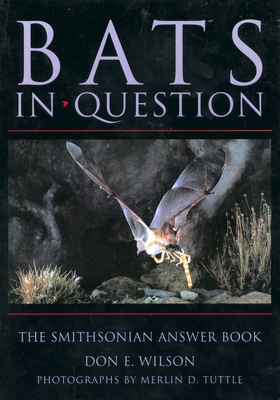 
Special Order—Subject to Availability
Long the subject of myth and superstition, bats have been among the most misunderstood of mammals due to their nocturnal habits, capacity for flight, and strange appearance. Seeking to dispel the myths associated with these remarkable creatures and arguing for their key role in a balanced ecosystem, Bats in Question covers all aspects of bat biology in a practical question-and-answer format.

Describing where bats live, how they use echolocation to navigate, and even why they hang upside down, the book also gives the conservation status of all 925 bat species. Don E. Wilson traces the evolution of bats and shows their remarkable diversity by describing each of the major groups in terms of their different body structures and habitats. He sheds light on bats' complex social systems, extraordinary variation in size, and food preferences that encompass plants, insects, and mammals. The book also explores cultural attitudes about bats—telling how, until recently, bats had been relegated to the world of vampires and how they have emerged to take their place in public awareness as important and fascinating members of our ecosystems.
Mammalogist Don E. Wilson is Director of Biodiversity Programs at the Smithsonian's National Museum of Natural History and is a member of the Scientific Board of Directors of Bat Conservation International. He is the editor of Mammal Species of the World (1993) and Measuring and Monitoring Biological Diversity: Standard Methods for Mammals (1996), both published by Smithsonian Institution Press.

An internationally recognized wildlife photographer and authority on bats, Merlin D. Tuttle is the founder and executive director of Bat Conservation International. He is the author of America's Neighborhood Bats (1988).
“Bats in Question will certainly answer all of your questions about bats. The book is beautifully illustrated.”—American Scientist

“The appealing layout invites you to jump in under any of the many interesting topics such as: when did bats evolve; what characterizes the major groups of bats; are bats a threat to humans; what should I do if I find a sick bat; and how can I become a bat biologist? Throughout the book, Wilson weaves in tales of his field research in a way that makes you feel you are having a conversation with him or attending a spirited lecture.”—Bats

“In a thoroughly indexed question and answer format, the realm of the bat, including biological factors, conservation status, evolutionary history, impact on ecosystems, and habits, is dissected and profusely illustrated.”—Science News