Storm over Iraq: Air Power and the Gulf War (Paperback) 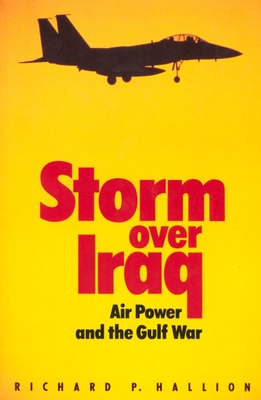 Storm over Iraq: Air Power and the Gulf War (Paperback)


Special Order—Subject to Availability
An incisive account of the Persian Gulf War, Storm Over Iraq shows how the success of Operation Desert Storm was the product of two decades of profound changes in the American approach to defense, military doctrine, and combat operations. The first detailed analysis of why the Gulf War could be fought the way it was, the book examines the planning and preparation for war. Richard P. Hallion argues that the ascendancy of precision air power in warfare—which fulfilled the promise that air power had held for more than seventy-five years—reflects the revolutionary adaptation of a war strategy that targets things rather than people, allowing one to control an opposing nation without destroying it.
Richard P. Hallion, Air Force Historian, directs the worldwide Air Force historical and museum programs. An internationally recognized aerospace historian, he has written or edited many other books.
“Authoritative and absorbing. . . . Hallion’s argument is provocative and challenges many current perceptions of military power projection. Well written, timely and incisive . . . . A rare find.”—Military Review

“An important study. . . . Hallion traces the evolution of air power doctrine from World War I to [the Gulf War]. It is a story of aspirations and expectations that for many years exceeded the reach of available technology, giving rise to a widespread skepticism about the potential of strategic bombardment.”—Journal of Military History

“Superb . . . [Storm over Iraq] may be the benchmark by which we measure understanding of the debate over the revolution in warfare that was heralded by Operation Desert Storm.”—Airpower Journal