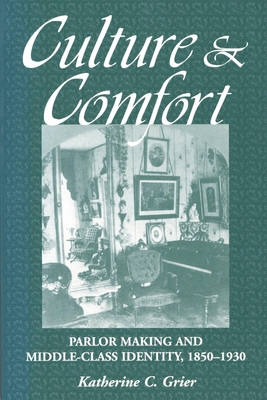 
Special Order—Subject to Availability
In Culture and Comfort Katherine C. Grier shows how the design and furnishings of the mid-nineteenth century parlor reflected the self-image of the Victorian middle class. Parlors provided public facades for formal occasions and represented an attempt to resolve the often opposing ideals of gentility and sincerity to which American culture aspired. The book traces the fortunes of the parlor and its upholstery from its early incarnations in “palace” hotels, railroad cars, steamships, and photographers' studios; through its mid-century heyday, when even remote frontier homes could boast “suites” of red plush sofas and chairs; to its slow, uneven metamorphosis into the more versatile living room. The author argues that even as the home increasingly was seen as a haven from industralization and commercialization, its ties to industry and commerce—in the form of more affordable, machine-made furniture and drapery—became stronger.

By the 1920s the parlor's decline signaled both a blurring of the Victorian distinctions between public and private manners and the transfer of middle-class identity from the home to the automobile. Describing the deportment a parlor required, the activities it sheltered, and the marketing and manufacturing breakthroughs that made it available to all, Culture and Comfort reveals the full range of cultural messages conveyed by nineteenth-century parlor materials.
Katherine C. Grier is an assistant professor of history at the University of Utah.
“Culture and Comfort is the most stimulating work on domestic furnishings and American culture in the nineteenth century. No other book combines such a rich analysis of material objects with such a firm, sophisticated grasp of American cultural history and cultural theory.”—John F. Kasson, University of North Carolina at Chapel Hill