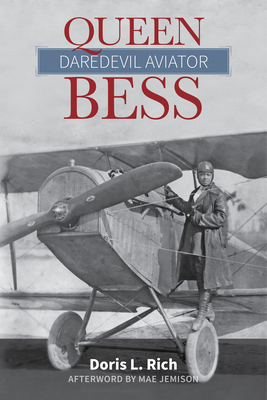 
Special Order—Subject to Availability
Queen Bess honors the brief but intense life of Bessie Coleman, America's first female aviator of African American and Native American heritage, who defied the strictures of race, sex, and society in pursuit of a dream. Born in 1892 in Atlanta, Texas, Coleman became interested in flying at an early age, but with no flight training opportunities for women or people of color in the United States at the time, she traveled to France to get her aviation license. She then returned to the US and launched a thrilling career, with her daring and dangerous barnstorming and flying-circus performances earning her a high-profile reputation and the nickname “Queen Bess.”

With no significant paper trail, much of Coleman’s life is lost to history. But author Doris L. Rich painstakingly pieced together her experiences using contemporary African American newspapers and interviews with Coleman’s friends and family to offer a remarkable tribute to an overlooked figure of American history. This biography captures the brilliance, determination, and spirit of a pioneering woman whose life was cut tragically short but whose legacy continues to inspire and empower.
DORIS L. RICH had a varied career as a reporter, writer, photographer, and teacher that took her all over the world, from Michigan to Guam, Korea, Shanghai, Bangladesh, and Africa. Her biography Amelia Earhart was named a Notable Book of the Year by the New York Times Book Review.
KIRKUS REVIEWS
“A timely and engaging introduction to a woman of stunning accomplishment and courage who deserves a place of high honor in the pantheon of early flying.”

CHICAGO TRIBUNE
“Working from news clippings, interviews with aging friends and relatives, and the brief unpublished memoirs of Coleman's older sister, she has sketched a vivid portrait of a woman who bucked tradition, racial prejudice and sexual discrimination in her determination to take to the skies.”

QUARTERLY BLACK REVIEW OF BOOKS
“Bessie Coleman crammed a lot of living into her thirty-four years. Her spirit of adventure, coupled with dogged determination to break down racial barriers in the United States, has inspired other African American women and men to dare to dream.”

CHICAGO SUN-TIMES
"Queen Bess is a valuable contribution to four kinds of history—of blacks, of women, of Chicago, and of aviation....Bessie Coleman was a great trailblazer, single-handedly opening the frontier of aviation for blacks. The Tuskegee Airmen, the famous black fighter pilots of World War II, can trace their beginnings to her example."

AVIATION
"Doris L. Rich [...] brings Bess Coleman to life and bestows her legacy with the recognition she rightfully deserves."

ANTIQUES AND AMERICANA
"A fascinating story."