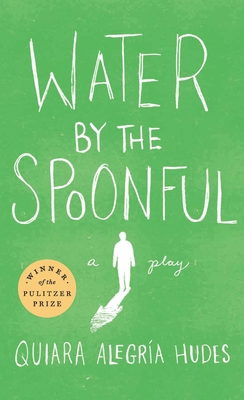 
Not On Our Shelves—Ships in 1-5 Days
"How many plays make us long for grace? Water by the Spoonful by Quiara Hudes is such a rare play; it is a yearning, funny, deeply sad and deeply lyrical piece, a worthy companion to Hudes's Elliot, A Soldier's Fugue. The play infects us with the urge to find connection within our families and communities and remains with us long after we've left the theater." -Paula Vogel, Pulitzer Prize-winning author of How I Learned to Drive "Hudes's writing is controlled and graceful. Each of the play's 15 short scenes is perfectly balanced, the language both lyrical and lucid." -Richard Zoglin, Time "For a drama peopled by characters who have traveled a long way in the dark, Water by the Spoonful gives off a shimmering, sustaining warmth. Ms. Hudes writes with such empathy and vibrant humor about people helping one another to face down their demons that regeneration and renewal always seem to be just around the corner." -Charles Isherwood, New York Times Winner of the 2012 Pulitzer Prize for Drama, Water by the Spoonful is "a rich, brilliant montage of American urban life that is as dazzling to watch as it is difficult to look away from" (Associated Press). Somewhere in Philadelphia, Elliot has returned from Iraq and is struggling to find his place in the world. Somewhere in a chat room, recovering addicts forge an unbreakable bond of support and love. The boundaries of family and community are stretched across continents and cyberspace as birth families splinter and online families collide. Water by the Spoonful is a heartfelt and poetic meditation on lives on the brink of redemption and self-discovery during a time of heightened uncertainty, "as startling and innovative and human on the page as on the stage" (Junot D az, Pulitzer Prize-Winning author). Hudes's cycle of three plays began with Elliot, A Soldier's Fugue (Pulitzer Prize finalist) and concludes with The Happiest Song Plays Last. Quiara Alegr a Hudes is the author of the Pulitzer Prize-winning Water by the Spoonful, the Tony Award-winning musical In the Heights and the Pulitzer Prize finalist Elliot, A Soldier's Fugue. Her other works include Barrio Grrrl , a children's musical; 26 Miles; Yemaya's Belly and The Happiest Song Plays Last, the third piece in her acclaimed trilogy. Hudes is on the board of Philadelphia Young Playwrights, which produced her first play in the tenth grade. She now lives in New York with her husband and children.