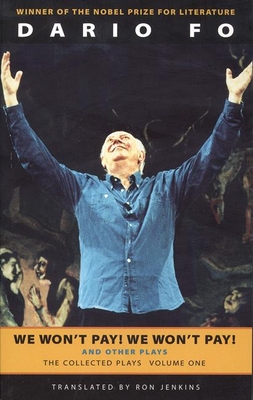 In the words of his translator, Ron Jenkins: The Nobel committee's decision to honor Fo as a master of literature is a historic tribute to the theatre, which is still viewed by many as literature's bastard child; it is also the first time that the Nobel for the literary arts has been awarded to an actor. This courageous and controversial choice indirectly expands the modern definition of literature to include the power of the spoken word.

One of the major theatrical artists of the 20th century, Italy's Dario Fo, togther with Franca Rame, his wife and creative partner, have been creating a theatrical foray uniquely their own for more than fifty years. One of the world's most produced playwrights, Fo was awarded the 1997 Nobel Prize for Literature. Ron Jenkins holds a doctorate from Harvard and a masters in buffoonery from the Ringling Brothers Clown College. His translations of Dario Fo and Hoshua Sobol have been performed at theatres around the country. He is the author of Dario Fo and Franca Rame: Artful Laughter and is the chair and artistic director of the theatre department at Wesleyan University in Connecticut.