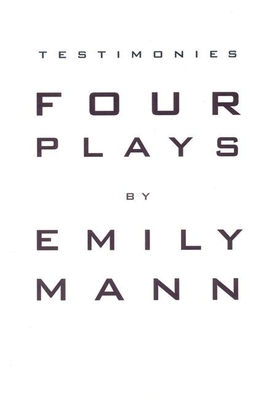 
Special Order—Subject to Availability
The first major collection by playwright Emily Mann contains four powerful docudramas. Based on extensive interviews of real people's experiences, these plays explore various moral issues and questions that still resonate in America today. Annulla: An Autobiography is a solo piece featuring the reflections of an elderly Jewish woman who survived the Holocaust by pretending to by Aryan. Jerry Talmer of the New York Post calls Annulla "one bangup 90 minutes of theatre...I don't know when I've been stimulated as much by anything on the living stage." Still Life is composed of interviews with a Vietnam War veteran with PTSD, the pregnant wife he physically and emotionally abuses, and the mistress who finds herself entranced by his passion and violence. This Obie Award-winning play is "a powerful affair, full of passion and viability...Mann offers no easy answers or pat solutions, she simply invites us into these three characters' lives" (Los Angeles Times). Execution of Justice follows the trial of the former policeman who shot San Francisco Mayor George Moscone and openly gay City Supervisor Harvey Milk in 1979. Called "thought-provoking...a taut courtroom drama" (New York Times), Execution of Justice "is theatre reasserting its claim on the country's moral conscience" (Washington Post). Greensboro: A Requiem is "a particularly all-American tragedy" (New York Times) as Mann interviews those involved in the largely unreported 1979 massacre of unarmed demonstrators by members of the Ku Klux Klan, Greensboro police force, and FBI. Forbes calls Greensboro "a provocation, a potent expos of the 'less-than-human thing' which fuels the politics of hate and injustice in America."

Emily Mann is a playwright and director. Her plays include Execution of Justice, Still Life and Having Our Say, among others. She is currently Artistic Director of Princeton, New Jersey's McCarter Theatre--recipient of the 1994 Tony Award for Outstanding Regional Theatre. Her numerous awards for artistic excellence include a Guggenheim, a Playwrights Fellowship and Artistic Associate Grant from the National Endowment for the Arts, a McKnight Fellowship and a Rosamund Gilder Award for Outstanding Creative Achievement in the Theatre. In recognition of her achievements illuminating the possibilities for social, cultural and political change, Ms. Mann was awarded the Lee Reynolds Award from the League of Professional Theatre Women/NY.