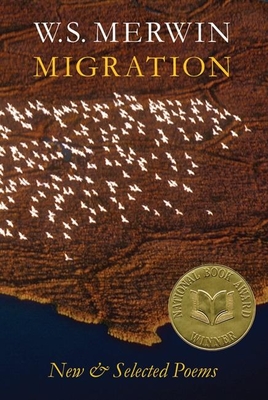 Named one of the 100 Notable Books of the Year by The New York Times.

Winner of the National Book Award for Poetry

"The poems in Migration speak a life-long belief in the power of words to awaken our drowsy souls and see the world with compassionate interconnection."--National Book Award judges' statement

"The publication of W. S. Merwin's selected and new poems is one of those landmark events in the literary world."--Los Angeles Times

W. S. Merwin is the most influential American poet of the last half-century--an artist who has transfigured and reinvigorated the vision of poetry for our time. Migration: New and Selected Poems is that case. This 540-page distillation--selected by Merwin from fifteen diverse volumes--is a gathering of the best poems from a profound body of work, accented by a selection of distinctive new poems.

As an undergraduate at Princeton University, Merwin was advised by John Berryman to "get down on your knees and pray to the muse every day." Migration represents the bounty of those prayers. Over the last fifty years, Merwin's muse has led him beyond the formal verse of his early years to revolutionary open forms that engage a vast array of influences and possibilities. As Adrienne Rich wrote of Merwin's work: "I would be shamelessly jealous of this poetry, if I didn't take so much from it into my own life."

W. S. Merwin is the author of over fifty books of poetry, prose, and translation. He lives in Hawaii, where he raises endangered palm trees.

W.S. Merwin is one of America's leading poets. His prizes include the 2005 National Book Award for his collected poems, Migration, the Pulitzer Prize, the Stevens Award, and fellowships from the Guggenheim Foundation and Lannan Foundation. He is the author of dozens of books of poetry and translations. He lives in Hawaii, where he cultivates endangered palm trees.