Cuba and Its Music: From the First Drums to the Mambo (Paperback) 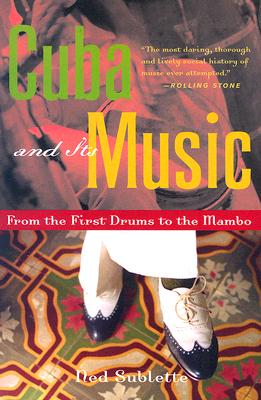 Cuba and Its Music: From the First Drums to the Mambo (Paperback)


Not On Our Shelves—Ships in 1-5 Days
This entertaining history of Cuba and its music begins with the collision of Spain and Africa and continues through the era of Miguelito Valdés, Arsenio Rodríguez, Benny Moré, and Pérez Prado. It offers a behind-the-scenes examination of music from a Cuban point of view, unearthing surprising, provocative connections and making the case that Cuba was fundamental to the evolution of music in the New World. The ways in which the music of black slaves transformed 16th-century Europe, how the claves appeared, and how Cuban music influenced ragtime, jazz, and rhythm and blues are revealed. Music lovers will follow this journey from Andalucía, the Congo, the Calabar, Dahomey, and Yorubaland via Cuba to Mexico, Puerto Rico, Saint-Domingue, New Orleans, New York, and Miami. The music is placed in a historical context that considers the complexities of the slave trade; Cuba's relationship to the United States; its revolutionary political traditions; the music of Santería, Palo, Abakuá, and Vodú; and much more.

Ned Sublette is the cofounder of the Qbadisc record label. He has coproduced the public radio program Afropop Worldwide for seven years and travels frequently to Cuba.
"As enthralling as it is comprehensive, [Sublette's] book breathes life and fire into the whole history of Cuban music."  —Bonnie Raitt

"Like none other...a chronicle as much of the music itself as of the histories embedded in the sounds."  —The Boston Phoenix

"It was Cuba that turned beat around, and thanks to Sublette any serious music fan will now know why." —The New York Times Book Review

“Ned, a New Yorker, has painted with a latin passion a huge fresco of Cuba and its music with exquisite and astounding details. A real page turner!” —Georges Collinet, host of Afropop Worldwide

“Sublette's book does for the field of Cuban popular music what Perez Prado's ‘Mambo Number Five’ did for the mambo—bring the tradition to world attention in a rich and most fabulous way.” —Robert Farris Thompson, author of Flash of the Spirit:African and Afro-American Art and Philosopy