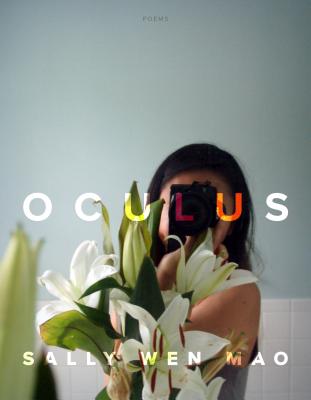 FINALIST FOR THE LOS ANGELES TIMES BOOK PRIZE FOR POETRY

In Oculus, Sally Wen Mao explores exile not just as a matter of distance and displacement but as a migration through time and a reckoning with technology. The title poem follows a nineteen-year-old girl in Shanghai who uploaded her suicide onto Instagram. Other poems cross into animated worlds, examine robot culture, and haunt a necropolis for electronic waste. A fascinating sequence spanning the collection speaks in the voice of the international icon and first Chinese American movie star Anna May Wong, who travels through the history of cinema with a time machine, even past her death and into the future of film, where she finds she has no progeny. With a speculative imagination and a sharpened wit, Mao powerfully confronts the paradoxes of seeing and being seen, the intimacies made possible and ruined by the screen, and the many roles and representations that women of color are made to endure in order to survive a culture that seeks to consume them.

Sally Wen Mao is the author of a previous poetry collection, Mad Honey Symposium. Her work has won a Pushcart Prize and fellowships at Kundiman, George Washington University, and the New York Public Library Cullman Center.

“There are eyes everywhere in Oculus, but not all of them are blessed with sight. Some are all-seeing, panoptic; others are yearning and blinkered, unable to return the gaze they attract. These poems are haunted by images of human faces staring out from all kinds of screens, faces that are themselves screens upon which the world projects its fantasies and anxieties. . . . The poems in Oculus are rangy, protean, contradictory. They offer an alternative to the selfie, that static reduction of a person to her most photogenic poses.”—The New Yorker

“In her stunning second collection, Mao stages a searing ventriloquy act. . . . These depictions speak and fight back against the white gaze that has framed them.”—NPR Books

“By telling [Anna May] Wong’s story, and those of other women of color who have been defined by images in popular culture, [Oculus] explores the ramifications of being seen and objectified but never truly known.”—The Washington Post

“If you love the work of Janelle Monáe, you'll love Oculus. From the very introduction, Sally Wen Mao doesn't hesitate to make sure the reader knows this is a book about Asian Futurism and the way technology impacts us all. The section on Hollywood will destroy you, focusing on telling the story 1930's actress Anna May Wong. But really, Oculus is both complex, but totally universal.”—Marie Claire

“Oculus is a deftly structured volume of hauntingly perceptive poems, peering backward through the 20th century while penetrating our contemporary moment. It’s an homage to pioneering Chinese Americans and an indictment of Asian representation in American culture, which never for a moment shies away from the difficult tasks of taking on race and history and technology all at once, but confidently looks them right in the eye, unblinking.”—Vulture

“Stunning, expansive. . . . [Oculus] marks Sally Wen Mao as one of the most compelling, provocative poets working today. . . . Mao’s language beautifully encompasses both the natural and technological worlds, infusing both with humanity, and offering a crystal clear vision of the ways in which our culture corrupts and consumes those who don’t fit within it seamlessly.”—Nylon

“Mao’s poems weave deeply between the quotidian and the global, limning the afterlives of those absent from history but over-used as representation. They remind me of the connections between aesthetics and politics: how we must imagine otherwise in order to affect political change.”—Anne Anlin Cheng, BOMB

“Sally Wen Mao’s poetry is at once speculative, sharp, lush, and precise. . . . Oculus tackles distance and exile, technology and time––several poems are told through the filter of a time-traveling Anna May Wong, the first Chinese American film star, which is all I needed to hear to zoom through space and time wherever she asks me to.”—Literary Hub

“The poems in [Oculus] consider the detritus and delirium of digital life. . . . Whether wayward spirit or nefarious satyr, Mao’s narrators and characters inhabit the sense of oculus as eye-opening, a transformative door.”—The Millions

“The imagination in . . . Oculus, revels in cybernetic possibilities, especially for the women of color who inhabit its pages. . . . Mao’s poems in Oculus ask what technologies already shape our vision of the world and how they might be disassembled in order for new lives to be forged from their parts.”—Los Angeles Review of Books

“Sally Wen Mao’s stunning second collection, Oculus, focuses not just on sight but on the politics of seeing.”—Columbia Journal

“[In Oculus] Mao discusses the dehumanization of women of color by offering them protection: blurred images, new armor, grounds and oceans to bury and lose themselves in. . . . A victorious and worthwhile review.”—The Arkansas International

“[Oculus] is a book consumed first and foremost with the impact of the spectacle on those of us for whom representation is both rare and often rapacious: women of color.”—Anomaly

“In Oculus, Mao demonstrates how the hyper-visibility produced by and through technology is often as effective a force for the Imperial gaze to ‘unsee’ or ‘missee’ non-white bodies as ignoring them altogether.”—The Bind

“Sally Wen Mao’s Oculus is a jolting lyric study of the white heteropatriarchal gazes that have vivisected racialized bodies throughout history.”—Lantern Review Blog

“The poems in Mao’s collection execute a deft two-punch maneuver. They first generate internal spectacle on the line, distracting from their local plot with flashy words and glittering gadgetry. Then . . . Oculus as a whole starts to look like spectacle, unveiling the artistic distance between the poetry and the very real, very serious topics and themes it comments on (the text and the notes, if
you will). Mao’s poems don’t just comment on spectacle — they literally perform it, unveiling its subtle machinery and complicated network of repercussions right there, right on the page.”—The Michigan Daily

“Mao crafts strangely elaborate yet piercing poems, which struggle with past and future problems of representation; she shines this intricately focused, futuristic light onto questions of what and who we allow on our screens.”—DigBoston

“Reading Oculus is like being given the gift of sight. . . . the possibility of being restored to who we could be, and who we could be next.”—Alexander Chee

“Oculus is a stunning and mesmerizing journey. . . . and it is brilliant. Mao’s is a consistently inspiring and exciting voice."—Morgan Parker

“Both scalpel and flood, poems of brooded, subtle syntax that build and accrue toward inevitable and stifling ferocity. Mao’s work reclaims for itself an acidic possibility.”—Ocean Vuong

“I simply trust no other poet to confront and fracture notions of Empire more deftly—and with such élan—than Sally Wen Mao.”—Aimee Nezhukumatathil

“A tour-de-force, a rousing ride.”—Marilyn Chin