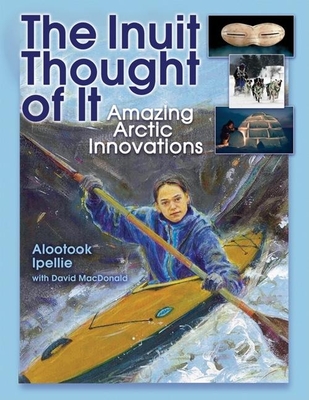 
Not On Our Shelves—Ships in 1-5 Days
Today's Arctic communities have all the comforts of modern living. Yet the Inuit survived in this harsh landscape for hundreds of years with nothing but the land and their own ingenuity. Join authors Alootook Ipellie and David MacDonald as they explore the amazing innovations of traditional Inuit and how their ideas continue to echo around the world. Some inventions are still familiar to us: the one-person watercraft known as a kayak still retains its Inuit name. Other innovations have been replaced by modern technology: slitted snow goggles protected Inuit eyes long before sunglasses arrived on the scene. Andother ideas were surprisingly inspired: using human-shaped stone stacks (Inunnguat) to trick and trap caribou. Many more Inuit innovations are explored here, including: - Dog sleds - Shelter - Clothing - Kids' stuff - Food preservation - Medicine. In all, more than 40 Inuit items and ideas are showcased through dramatic photos and captivating language. From how these objects were made, to their impact on contemporary culture, The Inuit Thought of It is a remarkable catalogue of Inuit invention.
Alootook Ipellie is an Inuit artist, writer and poet who contributes regularly to the "Nunavut News." Born and raised near Frobisher Bay on Baffin Island in the Canadian Arctic, he lives in Ottawa. David MacDonald is a freelance editor and the author of several educational books for young readers. He lives in Toronto.