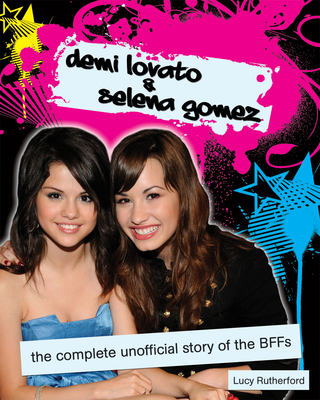 
Special Order—Subject to Availability
Few celebrities have climbed the rungs of the entertainment industry as quickly as Demi Lovato and Selena Gomez. Their rise to stardom was so brisk that some might describe them as overnight successes -- twin Cinderella stories. But both girls have been working to realize their dreams since they were very young, when they met as castmates on Barney & Friends and became best friends. Accomplished actors, singers, musicians, and dancers, Demi and Selena have earned the admiration of millions of fans and have grown to be wildly successful young women. Demi, who started her career as the star of Camp Rock and starred in the new original Disney Channel show Sonny With a Chance, has now released five studio albums. Besides roles on Hannah Montana, The Suite Life, and Another Cinderella Story, Selena was best known for starring as Alex in the smash hit Wizards of Waverly Place, and now this versatile musician has recorded three albums with the band Selena Gomez & the Scene and released two solo studio albums. Ever wonder what these girls were like before they hit it big time? This guide tells their story before the fame and record deals. Packed with tons of full-colour photos, Demi Lovato & Selena Gomez: The Complete Unofficial Story of the BFFs is the most comprehensive guide to these amazing Texan girls' beginnings: what they were like growing up, their families, first roles, their hit shows and castmates, their famous best friends the Jonas Brothers, and how making music means so much to them. With special sections on Camp Rock, Wizards of Waverly Place, Sonny With a Chance, and the girls' music, Demi Lovato & Selena Gomez takes you behind the bright lights and glamour to reveal the ordinary girls who have remained true to their roots -- and to each other.
Lucy Rutherford is the author of several non-fiction books and novels for children and young adults.