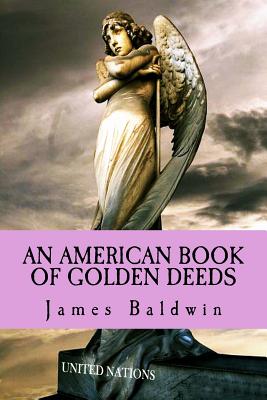 
Not On Our Shelves—Ships in 1-5 Days
(This book cannot be returned.)
AS you open this book you will probably ask, "What is a golden deed?" Let me tell you. It is the doing of something for somebody else doing it without thought of self, without thought of reward, fearlessly, heroically, and because it is a duty. Such a deed is possible to you, to me, to everybody. It is frequently performed without forethought or definite intention. It is the spontaneous manifestation of nobility, somewhere, of mind or heart. It may consist merely in the doing of some kind and helpful service at home or at school. It may be an unexpected test of heroism a warning of danger, a saving of somebody's life. It may be an act of benevolence, or a series of such acts, world-wide in application and results. This little volume is only a book of samples. Here are specimens of golden deeds of various kinds and of different degrees of merit, ranging from the unpremeditated saving of a railroad train to the great humanitarian movement which carries blessings to all mankind. To attempt to tell of every such deed, or of every one that is eminently worthy, would fill a multitude of books. The, examples which I have chosen are such only as have occurred on American soil, or have been performed by Americans, thus distinguishing the volume from Miss Charlotte Yonge's "Book of Golden Deeds," published for English readers fifty years ago. While some of these narratives may have the appearance of romance, yet they are all believed to be true, and in most cases the real name of the hero, or of the lover of humanity, is given. Instances of doing and daring have always a fascination for young people, and when to these is added the idea of a noble underlying motive the lessons taught by them cannot fail to be beneficial.
According to his biography in the Junior Book of Authors (1951), Baldwin, a native of Indiana and largely self-educated, began teaching at the age of 24. After several years he became superintendent of the graded schools in Indiana, a post he held for 18 years. The last 37 years of his life he worked with publishers, first with Harper and Brothers and later with the American Book Company. In addition to editing school books, he started writing books of his own. After the publication in 1882 of The Story of Siegfried, he went on to write more than 50 others. His influence was widely felt because at one time it was estimated that of all the school books in use in the United States, over half had been written or edited by him. Unfortunately, his works are much less widely known today. So far as known, only some of his books are in print and published today.