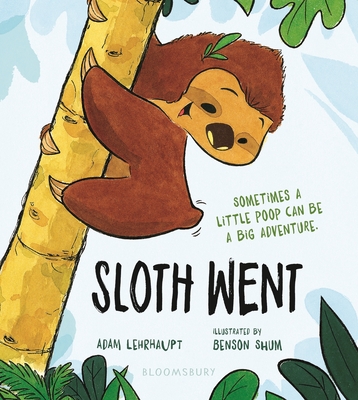 This hilarious board book is about a sloth on the go. A sloth who is . . . very slowly . . . making his way to a major milestone: potty training!

What if something happens?
What if NOTHING happens?

Sloth Went is a book about poop. But it's also an adventure story about facing your fears, gaining independence, and learning to do what you have to. Even if, as in Sloth's case, it takes a little while to get there.

Benson Shum has illustrated a number of picture books, including Adam Lehrhaupt’s Sloth Went, Jennifer Sattler’s Go to Sheep, and his own Anzu the Great Kaiju. Benson is also an animator at the Walt Disney Animation Studios, where he has contributed to such films as Frozen, Big Hero 6, Zootopia, Moana, Ralph Breaks the Internet, Frozen II, Raya and the Last Dragon, and Encanto. Originally from Vancouver, British Columbia, Benson now lives in sunny Southern California.

“Comic gold. . . . Younger children inspired by Sloth's courage and independent spirit may likewise be drawn to dance along after their own successful (e)missions.” —Booklist, starred review