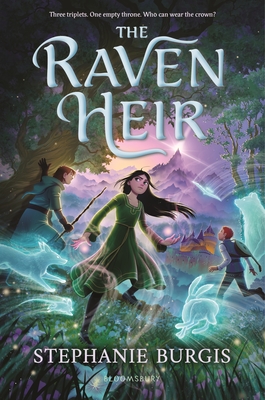 Perfect for fans of Robert Beatty and Shannon Hale comes a magical new middle grade fantasy series about a young shapeshifter trying to save her family.

Deep within an enchanted forest lies a castle where a set of triplets and their sorceress mother have lived for years--safe from the decades-long war for the Raven Throne that rages in the kingdom. Cordelia, one of the triplets, has the power to become any animal with just a thought, and she yearns to discover more about the world outside her castle.

But one day, the world comes to her, when the eldest of the triplets becomes the newest heir to the throne. Knowing that being named heir means certain death, Cordelia's mother hid the truth about which child is the eldest when she hid them in the forest. When her family is captured, it's up to Cordelia to use her powers to keep her siblings hidden and discover the truth about the Raven Heir--before it's too late.

From the author of The Dragon with a Chocolate Heart comes a thrilling new fantasy full of magic, adventure, and the power of family.

Stephanie Burgis is a dual citizen of the US and the UK and lives in South Wales (land of dragons) with her husband, the author Patrick Samphire, and their children. The Dragon with a Chocolate Heart is Stephanie's first (delicious) novel for Bloombsury.

“Brimming with magic, The Raven Heir is thrilling, enchanting, and delightful, with a beautiful message about what family means and an irresistible shapeshifting heroine. Absolutely magnificent!” —Sarah Beth Durst, award-winning author of Spark

“From the first page to the last, you won't be able to set down this enthralling tale of magic, mystery, and political intrigue!” —bestselling author Jessica Day George

“A captivating, timeless tale that runs, burrows, and soars! I read the whole thing as if under a spell. The Raven Heir is destined to become a classic.” —Jenn Reese, author of A Game of Fox & Squirrels

“Burgis's focus on how the land influences the closely knit family . . . results in a vividly described setting and a strong, shifting sibling dynamic.” —Publishers Weekly

"Burgis weaves a tale that inspires readers to harness the magic within themselves, even during challenging times. This title would appeal to fans of Chris Colfer's “Land of Stories” series and Kelly Barnhill’s The Girl Who Drank the Moon." - School Library Journal Online

“Like sipping hot cocoa on a cold day, reading this book was an absolute delight.” —Sheila Grau, author of the Dr. Critchlore's School for Minions series on THE DRAGON WITH A CHOCOLATE HEART

“This story is a delightfully delicious blend of magic spiced with adventure and a heart as sweet and warm as molten chocolate. I completely adored this book!” —Sarah Prineas, author of THE MAGIC THIEF and Winterling series on THE DRAGON WITH A CHOCOLATE HEART

“Black-presenting Silke's an entirely believable character; supporting characters are equally well-drawn, and Burgis' world is a robustly diverse one. As with the first book, the fantasy hijinks are tempered with depth for a story that's sweet but not saccharine.” —Kirkus Reviews, starred review, on THE GIRL WITH THE DRAGON HEART

“A gloriously fresh story to be read with a steaming cup of chocolate at hand.” —Kirkus Reviews, starred review, on THE DRAGON WITH A CHOCOLATE HEART

“A rousing adventure story with convincing characters and a colorful setting.” —Booklist on THE PRINCESS WHO FLEW WITH DRAGONS