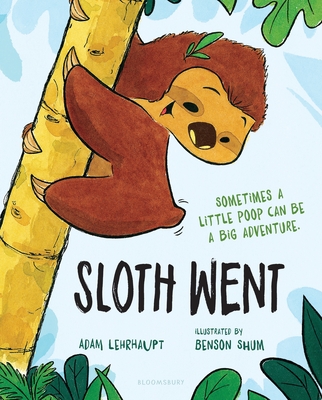 This hilarious picture book is about a sloth on the go. A sloth who is . . . very slowly . . . making his way to a major milestone: potty training!

What if something happens?
What if NOTHING happens?

Sloth Went is a book about poop. But it's also an adventure story about facing your fears, gaining independence, and learning to do what you have to. Even if, as in Sloth's case, it takes a little while to get there.

Also included: back matter with the amazing true story of how sloths poop!

Benson Shum is a children's book author and illustrator who has illustrated a number of picture books like Adam Lehrhaupt's Sloth Went and Jennifer Sattler's Go to Sheep. Benson is also an animator at the Walt Disney Animation Studios, where he was a part of such films as Frozen, Big Hero 6, Zootopia, Moana, Ralph Breaks the Internet, Frozen II, and currently Raya and the Last Dragon. Originally from Vancouver, BC, Benson now lives in sunny southern California.

“Comic gold. . . . Younger children inspired by Sloth's courage and independent spirit may likewise be drawn to dance along after their own successful (e)missions.” —Booklist, starred review

“Good humored but never at the expense of empathy. Families facing similar toilet trepidation will find plenty of sympathy and wisdom in these pages.” —Publishers Weekly