How Safe Are We?: Homeland Security Since 9/11 (Hardcover) 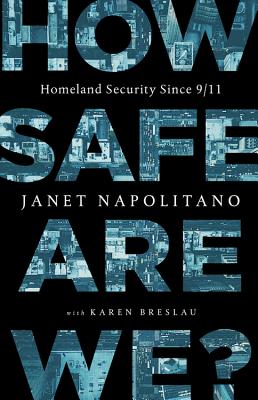 How Safe Are We?: Homeland Security Since 9/11 (Hardcover)

By Janet Napolitano, Karen Breslau (With)


Special Order—Subject to Availability
Former Secretary of the Department of Homeland Security Janet Napolitano offers an insightful analysis of American security at home and a prescription for the future.

Created in the wake of the greatest tragedy to occur on U.S. soil, the Department of Homeland Security was handed a sweeping mandate: make America safer. It would encompass intelligence and law enforcement agencies, oversee natural disasters, commercial aviation, border security and ICE, cybersecurity, and terrorism, among others. From 2009-2013, Janet Napolitano ran DHS and oversaw 22 federal agencies with 230,000 employees.

In How Safe Are We?, Napolitano pulls no punches, reckoning with the critics who call it Frankenstein's Monster of government run amok, and taking a hard look at the challenges we'll be facing in the future. But ultimately, she argues that the huge, multifaceted department is vital to our nation's security. An agency that's part terrorism prevention, part intelligence agency, part law enforcement, public safety, disaster recovery make for an odd combination the protocol-driven, tradition-bound Washington D.C. culture. But, she says, it has made us more safe, secure, and resilient.

Napolitano not only answers the titular question, but grapples with how these security efforts have changed our country and society. Where are the failures that leave us vulnerable and what has our 1 trillion dollar investment yielded over the last 15 years? And why haven't we had another massive terrorist attack in the U.S. since September 11th, 2001? In our current political climate, where Donald Trump has politicized nearly every aspect of the department, Napolitano's clarifying, bold vision is needed now more than ever.
Janet Napolitano is a distinguished public servant with a record of leading large, complex organizations at the federal and state levels. She served as secretary of Homeland Security from 2009-2013. Before that, she was the governor of Arizona, previously serving as attorney general of Arizona and before that as US attorney for the District of Arizona. She was the first woman to chair the National Governors Association, and was named one of the nation's top five governors by Time magazine. Since 2013, she has served as the president of the University of California.
"A measured, thoughtful analysis... A clear-eyed, rational examination of a government office that plays a key and often misunderstood role in the lives of all Americans."—KirkusReviews

"Janet Napolitano has distilled a lifetime of service in How Safe Are We?. Her thinking is clear and her vision for the future is expansive. The message of this book could not be more timely."—George Stephanopoulos

"A smart, strategic, and impactful book on the security of America. The compelling narrative weaves together Janet's incredible life experience with her insightful commentary on some of the biggest issues we face today-from cybersecurity to immigration, to natural disasters. And this book is a must-read for anyone who wants to make sense of which threats are real and which are dangerous political theater."—Kathleen Sebelius, Former Secretary of Health and Human Services

"Janet Napolitano provides a knowledgeable report card on what works well in securing our nation and what still needs improvement. Her fact-based and practical observations should be welcomed by those looking for clear assessments of how safe we really are."—Michael Chertoff, Secretary of Homeland Security, 2005-2009

"Not only is Napolitano's account of her time as head of DHS funny and blunt, her smart take on creating 'a safe, secure and resilient nation' is steeped in vast experience and rich insider detail. This terrific book should be required reading for everyone who works in - or cares about - keeping our homeland secure."—Jennifer Granholm, former Governor of Michigan

"This succinct and insightful book should be widely read-whether by the expert practitioner or average citizen. It is an enlightening report card on the whole range of national challenges which come under the broad rubric of homeland security, including critiques of the current administration's approach. Janet Napolitano knows what she's talking about; unlike so many pontificators on this subject today, she's lived the issue. She is the consummate public servant and she has contributed to her distinguished record of accomplishment with this superb volume."—James Clapper, former Director of National Intelligence

"A compelling account of Homeland Security in the 21st Century-where we were, where we are, and where we need to go. Napolitano's emphasis on cyber and natural disasters highlight threats that are still not being adequately addressed at the national level. This book offers common sense approaches to these threats and others that continue to rapidly evolve."—William Bratton, former New York City Police Commissioner and former Chief of the LAPD


"This valuable work should appeal to readers with cool heads about national security, who will appreciate Napolitano's suggestion to evaluate risk based on data rather than rhetoric."