New York's Finest: Stories of the NYPD and the Hero Cops Who Saved the City (Hardcover) 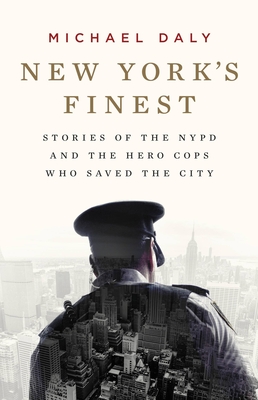 New York's Finest: Stories of the NYPD and the Hero Cops Who Saved the City (Hardcover)


On Our Shelves Now at:
The gritty, true blue story of two remarkable cops and an equally extraordinary nurse who provided the spirit and smarts that transformed Fear City into the safest big city in America.

NEW YORK'S FINEST is the story of a city's transformation through the tireless efforts of Detective Steven McDonald, Nurse Justiniano, Jack Maple, and a host of hero cops—including the great niece of Jazz Age great Josephine Baker—the finest of The Finest.  The son and grandson of cops, Officer McDonald was shot and paralyzed from the neck down while on patrol in 1986. The doctors said that if he did survive, he would be better off dead. It was then he came under the care of one Nurse Nina Justiniano. Where the teenage gunman was produced by the worst of Harlem's social ills, she personified its many graces, rescuing Steven from despair and urging him to transcend hate and bitterness.

McDonald was then promoted to detective at the urging of NYPD Deputy Commissioner Jack Maple, a postal worker's son who sported a bow tie, Homburg hat, and two-tone shoes as he implemented transformative crime-fighting strategies to deter violent subway robberies. Coming up in the force, Maple had been routinely mocked for imagining the impossible: that Times Square would one day be a destination for families and tourists.

Now, resentments and tensions are mounting in the same neighborhoods that most benefited from the careful consideration of officers like McDonald and Maple. But as NEW YORK'S FINEST illustrates, their legacies, and those of people like Nurse Justiniano, may well rescue New York City from its present state of unrest and struggle in the wake of protests and the pandemic.
Michael Daly is a special correspondent with The Daily Beast. He was previously a columnist with the New York Daily News and a staff writer with New York Magazine. He was a finalist for the Pulitzer Prize for commentary in 2002 and has received numerous awards.
"NEW YORK'S FINEST is so gripping, it made my heart race. I was only able to read a few chapters a night or I couldn't sleep. The way it penetrates to the heart of these NYPD families, this calling (there is no other word) is so moving and vivid it has changed forever my perception of the police. It manages all at once to be thrilling, heartbreaking, inspiring, and exhilarating. It is Michael Daly’s tour de force."—Tina Brown, New York Times bestselling author of THE VANITY FAIR DIARIES

"Michael Daly is one of the finest street reporters New York has ever known. The power of his writing derives in part from both his instinctual humanism and his ability to capture the nuances of his people with novelistic aplomb. And when, as in NEW YORK'S FINEST, he writes about those he has deeply admired (if not downright loved), such as Jack Maple and Father Mychal Judge, Michael Daly is at his shining best."—Richard Price, New York Times bestselling author of THE WHITES

"Michael Daly’s NEW YORK'S FINEST is the story of the policemen and -women who transformed New York from 'Fear City' into the safest big city in America. There have been plenty of books and articles that missed this story. Michael Daly did not."—Nicholas Pileggi, author, producer and screenwriter

"NEW YORK'S FINEST is a peek behind the borders of a Blue Nation that is kicked around like a football from one politician to the next. These are the voices of the unseen and unheralded: the legendary Jack Maple whose honesty and ingenuity made New York City safe, the angelic Steve McDonald whose kindness inspired thousands, and the diminutive Vertel Martin, whose courage is a testament to Americans everywhere. They are among the finest that New York has ever produced, and Daly has shared them with us."—James McBride, New York Times bestselling author of DEACON KING KONG

Daly’s research and vibrant writing provide the reader with a clear understanding, especially through the two men he selected to honor, of what police work is supposed to be—NY Journal of Books