Deliberately Divided: Inside the Controversial Study of Twins and Triplets Adopted Apart (Hardcover) 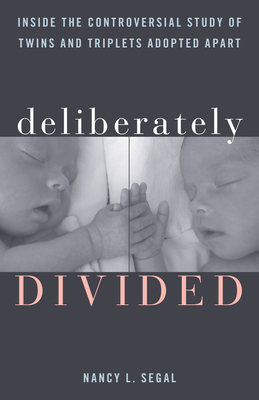 Deliberately Divided: Inside the Controversial Study of Twins and Triplets Adopted Apart (Hardcover)


Not On Our Shelves—Ships in 1-5 Days
(This book cannot be returned.)
Takes the first in-depth look at the New York City adoption agency that separated twins and triplets in the 1960s, and the controversial and disturbing study that tracked the children's development while never telling their adoptive parents that they were raising a "singleton twin." In the early 1960s, the head of a prominent New York Cit Child Development Center and a psychiatrist from Columbia University launched a study designed to track the development of twins and triplets given up for adoption and raised by different families. The controversial and disturbing catch? None of the adoptive parents had been told that they were raising a twin--the study's investigators insisted that the separation be kept secret. Here, Nancy Segal reveals the inside stories of the agency that separated the twins, and the collaborating psychiatrists who, along with their cadre of colleagues, observed the twins until they turned twelve. This study, far outside the mainstream of scientific twin research, was not widely known to scholars or the general public until it caught the attention of documentary filmmakers whose recent films, Three Identical Strangers and The Twinning Reaction, left viewers shocked, angered, saddened and wanting to know more. Interviews with colleagues, friends and family members of the agency's psychiatric consultant and the study's principal investigator, as well as a former agency administrator, research assistants, journalists, ethicists, attorneys, and--most importantly--the twins and their families who were unwitting participants in this controversial study, are riveting. Through records, letters and other documents, Segal further discloses the investigators' attempts to engage other agencies in separating twins, their efforts to avoid media exposure, their worries over informed consent issues in the 1970s and the steps taken toward avoiding lawsuits while hoping to enjoy the fruits of publication. Segal's spellbinding stories of the twins' separation, loss and reunion offers readers the behind-the-scenes details that, until now, have been lost to the archives of history.
Nancy L. Segal, PhD, is Professor of Psychology at California State University, Fullerton and Director of the Twin Studies Center. She has authored over 250 scientific articles and six books on twins and twin development--a recent survey placed her among the top 2% of well-cited scientists worldwide. Segal's 2012 book, Born Together-Reared Apart: The Landmark Minnesota Twin Study, won the 2013 William James Book Award from the American Psychological Association. Her other books include Twin Mythconceptions: False Beliefs, Fables and Facts About Twins (2017), Someone Else's Twin: The True Story of Babies Switched at Birth (2011), Indivisible by Two: Lives of Extraordinary Twins (2007) and Entwined Lives: Twins and What They Tell Us About Human Behavior (2000). Her most recent book, Accidental Brothers (2018), follows the incredible life histories of two sets of identical male twins in Colombia who were inadvertently switched at birth. She has appeared on the Today Show, CBS This Morning, Good Morning America and the Oprah Winfrey Show, and been featured in the New York Times, Wall Street Journal and Atlantic Monthly. Segal has also served as a consultant and expert witness for the media, the law and the arts. Born in Boston and raised in New York City, she lives in southern California.