The Last Great Senate: Courage and Statesmanship in Times of Crisis (Paperback) 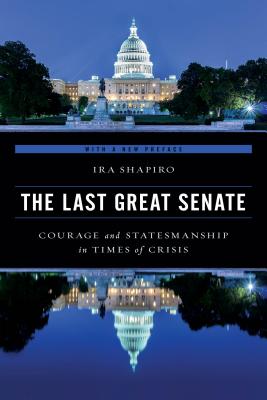 The Last Great Senate: Courage and Statesmanship in Times of Crisis (Paperback)


Not On Our Shelves—Ships in 1-5 Days
The Last Great Senate tells the story of the final four years of the progressive Senate of the 1960s and 1970s which compiled a record of accomplishment unmatched in our country's history. It is a narrative history of the statesman who, working with an outsider president, Jimmy Carter, helped steer America through the crisis years of the late 1970s, transcending partisanship and overcoming procedural roadblocks that have all but crippled the Senate over the past quarter- century. The Last Great Senate recalls a critical juncture in American politics, offering a new view of the kind of leadership that will be required to restore the nation's upper house to greatness. The book brings to life the renowned senators of the time---Ted Kennedy, Howard Baker, Henry "Scoop" Jackson, Ed Muskie, Jacob Javits, Robert Byrd and others---while capturing the Senate as an ensemble cast in a way that no previous book has. Mr. Shapiro recounts a series of legislative battles, including the historic fight over the Panama Canal treaty and the rescues of New York City and Chrysler, that are remarkable case studies of the legislative process in action. His preface to this second edition provides a compelling summary of the Senate's struggles since 1980, including the first six months of the Trump presidency. The author's love of the Senate and his deep belief in its special role in our political system make the book an antidote to cynicism, leaving readers with some hope that the Senate can reverse its long decline to become again what Walter F. Mondale called "the nation's mediator.
Ira Shapiro has worked in senior positions in the U.S. Senate and served as a leading U.S. trade negotiator, ultimately earning the rank of ambassador. He resides in Potomac, Maryland.