Broken: Can the Senate Save Itself and the Country? (Hardcover) 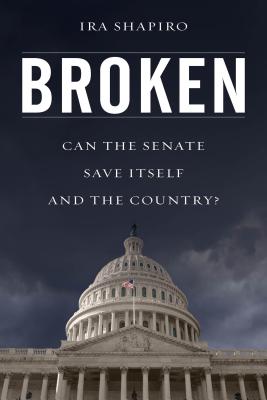 Broken: Can the Senate Save Itself and the Country? (Hardcover)


Special Order—Subject to Availability
While the hyper-partisanship in Washington that has stunned the world has been building for decades, Ira Shapiro argues that the U.S. Senate has suffered most acutely from the loss of its political center. In Broken, Ira Shapiro, a former senior Senate staffer and author of the critically-acclaimed book The Last Great Senate, offers an expert's account of some of the most prominent battles of the past decade and lays out what must be done to restore the Senate's lost luster. Shapiro places the Senate at "ground zero for America's political dysfunction"--the institution that has failed the longest and the worst. Because the Senate, at its best, represented the special place where the Democrats and Republicans worked together to transcend ideological and regional differences and find common ground, its decline has intensified the nation's polarization, by institutionalizing it at the highest level. Shapiro documents this decline and evaluates the prospects of restoration that could provide a way out of the polarized morass that has engulfed Congress. With a narrative that runs right through the first year of the Trump presidency, Broken will be essential reading for all concerned about the state of American politics and the future of our country.
Ira Shapiro, author of The Last Great Senate: Courage and Statesmanship in Times of Crisis (Public Affairs, 2012) has worked in senior positions in the U.S. Senate and served as a leading U.S. trade negotiator, ultimately earning the rank of ambassador. He resides in Potomac, Maryland.