The Suffragist Playbook: Your Guide to Changing the World (Paperback) 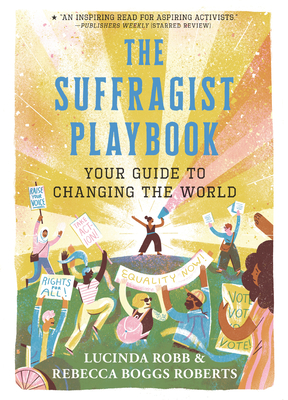 The Suffragist Playbook: Your Guide to Changing the World (Paperback)


On Our Shelves Now at:
Do you have a cause you’re passionate about? Take a few tips from the suffragists, who led one of the largest and longest movements in American history.

The women’s suffrage movement was decades in the making and came with many harsh setbacks. But it resulted in a permanent victory: women’s right to vote. How did the suffragists do it? One hundred years later, an eye-opening look at their playbook shows that some of their strategies seem oddly familiar. Women’s marches at inauguration time? Check. Publicity stunts, optics, and influencers? They practically invented them. Petitions, lobbying, speeches, raising money, and writing articles? All of that, too.

From moments of inspiration to some of the movement’s darker aspects—including the racism of some suffragist leaders, violence against picketers, and hunger strikes in jail—this International Literacy Association Young Adult Book Award winner takes a clear-eyed view of the role of key figures: Susan B. Anthony, Lucy Stone, Sojourner Truth, Elizabeth Cady Stanton, Frances Willard, Ida B. Wells, Alice Paul, and many more. Engagingly narrated by Lucinda Robb and Rebecca Boggs Roberts, whose friendship goes back generations (to their grandmothers, Lady Bird Johnson and Lindy Boggs, and their mothers, Lynda Robb and Cokie Roberts), this unique melding of seminal history and smart tactics is sure to capture the attention of activists-in-the-making today.
Rebecca Boggs Roberts is the author of Suffragists in Washington, DC: The 1913 Parade and the Fight for the Vote and Historic Congressional Cemetery. She has been many things, including a journalist, producer, tour guide, forensic anthropologist, event planner, political consultant, jazz singer, and radio talk show host. Currently she is the curator of programming at Planet Word. She lives in Washington, DC, with her husband, three sons, and a long-eared hound.


Lucinda Robb was project director for Our Mothers Before Us: Women and Democracy, 1789–1920 at the Center for Legislative Archives. The project rediscovered thousands of overlooked original documents and produced a traveling exhibit and education program highlighting the role of women in American democracy. She also helped organize the National Archives’ celebration of the seventy-fifth anniversary of the Nineteenth Amendment in 1995. She lives in Virginia with her husband, three children, one dog, and more than five hundred PEZ dispensers.
The authors, friends from two powerful U.S. political families that have been intertwined for three generations, set out to write a quick guide showing how suffragists changed the country by securing women’s voting rights...The White authors do not shy away from addressing racism within the movement, highlighting Black suffragists and noting everyone’s race so that Whiteness is not the default. Each chapter title is a synopsis of a strategy (for example, “Tell Your Story,” “Engage a Wider Audience,” and “Recruit the Allies You Need”), and each chapter begins and ends with sage advice to readers about how to apply the successful tactics of the suffragists to today’s political struggles. The bright, clean layout and color scheme are visually enticing, making this an appealing manual for action. An outstanding and inspirational guide to women’s history for today’s political activists.
—Kirkus Reviews (starred review)

This collaboration between friends Robb and Roberts (Suffragists in Washington, D.C.), both scions of political families, dually functions as a well-documented history of the suffrage movement in the U.S. as well as a practical manual for activism...By not shying away from discussions of racism, jail and torture, opposition, and infighting, this how-to guide shows that “women’s history is action packed,” and that the suffragists served as models for other activists to follow...the language is relatable, employing current vernacular and a conversational tone (“We’re looking at you, Philadelphia”), which makes for an inspiring read for aspiring activists.
—Publishers Weekly Online (starred review)