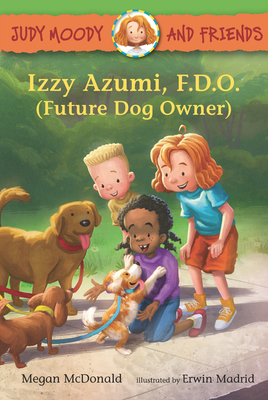 This is book number 14 in the Judy Moody and Friends series.

Fluffy dogs. Scruffy dogs. Pug-faced dogs. Ugh-faced dogs. Izzy Azumi has dogs on the brain! She already has a goldfish, a South American pink-toe tarantula, and two human best friends. But fish can’t learn tricks, spiders can’t cuddle, and Stink and Judy just aren’t fuzzy enough. Will Izzy Azumi ever see her wish come true? All bets are off . . . until Izzy’s father invites a certain sibling pair to help stage a surprise for their friend. This latest entry in a series for fledgling readers will have younger Judy Moody fans—especially those who long for a dog of their own—yelping for joy.
Megan McDonald is the author of the popular Judy Moody and Stink series for older readers. She has also written many other books for children, including two beginning readers featuring Ant and Honey Bee. Megan McDonald lives in California.

Erwin Madrid has worked as a visual development artist for the Shrek franchise and Madagascar: Escape 2 Africa and has created conceptual art for video games. He is also the illustrator of The Scary Places Map Book by B. G. Hennessy. Erwin Madrid lives in Nevada.