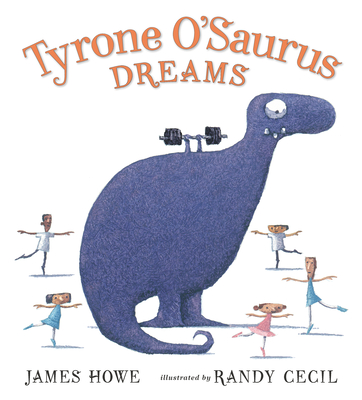 
In Stock—Click for Locations
In a follow-up to the beloved Brontorina, a young dinosaur finds unexpected support for his secret dream: to defy expectations and become a dancer.

Tyrone has a dream. But it seems like everyone else has their own dream for Tyrone. Should he be a dentist? A lawyer? A football player like his brother Johnny? None of these things make Tyrone happy. But then he meets the strongest dinosaur he’s ever seen, who inspires him to follow his own heart and become a dancer—like her. The creators of Brontorina reunite for a captivating companion story about a young dinosaur who, with a little love and encouragement, finds the courage to dance his way into his dreams.
James Howe is the author of many books for children, including the Bunnicula series and the Misfits series. He is also the author of the Houndsley and Catina books, as well as Otter and Odder, illustrated by Chris Raschka; Brontorina, illustrated by Randy Cecil; and Big Bob, Little Bob, illustrated by Laura Ellen Anderson. James Howe lives outside of New York City.

Randy Cecil is the author and illustrator of the picture books Douglas and Lucy, and has illustrated many books for children, including Brontorina by James Howe, And Here’s to You! by David Elliott, and Looking for a Moose by Phyllis Root. He is also the author-illustrator of Gator and Duck. Randy Cecil lives in Houston.
Can a T. rex pirouette and jeté on a ballet stage?...Cecil’s dappled art provides a humorous contrast between the hefty dinosaurs and the stick-figure humans. His choice of colors for the dinos—textured blue for Tyrone and a bright orange for Brontorina—helps them fill the pages to overflowing. Tyrone’s softly edged outline, so dramatically unlike his prehistoric ancestors’, gives him definite cuddly appeal. Brontorina first appeared in her own eponymous tale (2010), in which she made it quite clear that dinosaurs need outdoor studios. Yes, dreams can come true—even if you are a dancing dinosaur.
—Kirkus Reviews

...Cecil’s precise, textured oils have Tyrone often poised on tiptoe or balanced in an arabesque pose, and the spread with kids, dinos, and, yes, cows dancing away at Madame Lucille’s is especially giggleworthy. This is an easy pick for a dance-themed storytime or a discussion of finding one’s interests and supporting others in their search
—Bulletin of the Center for Children's Books