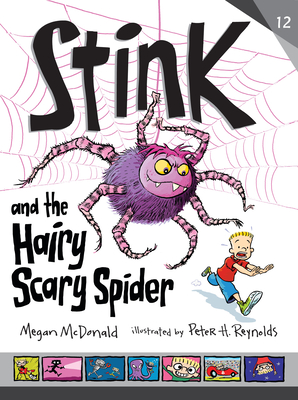 This is book number 12 in the Stink series.

Stink’s spider phobia spurs his sister, Judy, and friend Webster to try some desensitization techniques—until a real-life encounter takes them by surprise—in a hilarious episode offering a bonus origami activity.

Creepy! Crawly! Criminy! Everyone knows that Stink is bonkers about most scientific things. But there’s one exception: dangle a spider in front of him and he goes berserk! Stink is so freaked out by spiders that he can’t read about them. He can’t look at them. He can’t think about them. And he for-sure can’t touch them! Stink has arachnophobia (a fear of spiders), and he has it bad. But when a hairy backyard emergency arises, Stink is forced to face his fear—and eight beady eyes—head-on. Will he manage to tame the heebie-jeebies, or will he remain stuck in his web of terror? Arachno-fans will love the comics sprinkled throughout with facts about spiders as well as a hands-on origami challenge.
Megan McDonald is the author of the popular Judy Moody and Stink series for older readers. She has also written many other books for children, including two books for beginning readers: Ant and Honey Bee: A Pair of Friends at Halloween and Ant and Honey Bee: A Pair of Friends in Winter. She lives in California.

Peter H. Reynolds is the illustrator of the Judy Moody and Stink books and the author-illustrator of The Dot, Ish, Sky Color, So Few of Me, The North Star, Rose’s Garden, The Smallest Gift of Christmas, and Playing from the Heart. Born in Canada, he now lives in Dedham, Massachusetts.
Newcomers will be able to slide in with ease; there’s no extensive backstory here to wade through—just some quirky kids dealing with a common fear. The reading level is pitched to those just beginning to dip their toes in the chapter-book pool...More of the same, but here that’s a good thing.
—Kirkus Reviews

The accessible text is perfect for young readers and uses frequently repeated words and phrases. Short chapters delineate the story and provide an opportunity for Reynolds to showcase his marvelous and goofy illustrations. Hand this to fans of the “Stink” series or any spider-loving early reader.
—School Library Journal