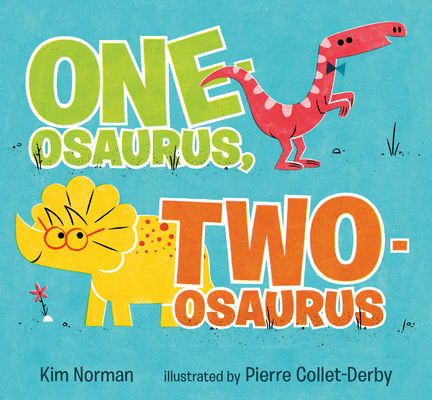 
In Stock—Click for Locations
Part counting game, part dinosaur celebration, this energetic romp is a numbers concept book for the ages.

Look there, in a child’s bedroom, where some prehistoric pals are gathered in a counting game. Nine dinosaurs are playing a sing-song rendition of hide-and-seek—but something isn’t adding up. Where is number ten? Stomp, stomp, stomp! CHOMP, CHOMP, CHOMP! Ready or not, here he comes, and he sounds . . . big! With big, bold numerals, an array of dinosaurs in comical poses, and a humorous twist at the end, this tribute to a child’s imagination makes learning numbers a gigantic treat.
Kim Norman is an artist, actress, and singer as well as an author of many children’s books, including Give Me Back My Bones!, Puddle Pug, and The Bot That Scott Built. Calling herself a “bedtime book booster,” Kim Norman visits schools around the country, sharing her love of books. She lives in Virginia.

Pierre Collet-Derby is an author and illustrator of numerous children’s books. He worked for many years in the animation and video game industries before devoting his days to drawing, writing, and strumming his ukulele. Born and raised in France, where he studied animation, Pierre Collet-Derby now lives in Canada.
Norman’s latest outing and first collaboration with Collet-Derby is storytime and read-aloud gold, featuring as it does a tight, patterned rhyme, an artful use of page turns, and a mighty “ROAR!” midstream—not to mention lots of dinosaurs...A dino-delight.
—Kirkus Reviews (starred review)