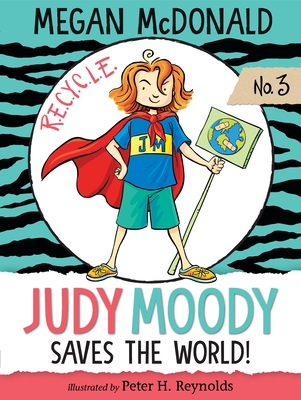 This is book number 3 in the Judy Moody series.

The mercurial Judy returns, and she's in a mood to take on the world. RARE!

When her "Heal the World" adhesive-bandage design doesn’t win a contest, Judy Moody realizes it’s time to set her sights on something bigger. Class 3T is studying the environment, and Judy is amazed to learn about the destruction of the rain forest, the endangered species (not) in her own backyard, and her own family’s crummy recycling habits. Now she’s in a mood to whip the planet into shape!
Megan McDonald is the creator of the popular and award-winning Judy Moody and Stink series. She is also the author of three Sisters Club stories, two books about Ant and Honey Bee, and many other books for children. Megan McDonald lives in California.

Peter H. Reynolds is the illustrator of the Judy Moody and Stink books and the author-illustrator of The Dot, Ish, Sky Color, So Few of Me, The North Star, Rose’s Garden, The Smallest Gift of Christmas, and Playing from the Heart. Born in Canada, he now lives in Dedham, Massachusetts.
This charming read features characteristically snappy, humorous prose; expressive, witty, black-and-white illustrations; and some great ideas for classroom or home projects.
—Booklist

The engaging tale is a triumph for Judy and her creator.
—Orlando Sentinel

JUDY MOODY SAVES THE WORLD! is cleverly written, and its heroine is an appealing and very real third grader.
—The Five Owls (starred review)

Judy's growing corps of fans will crow 'Rare!' right along with her.
—Kirkus Reviews