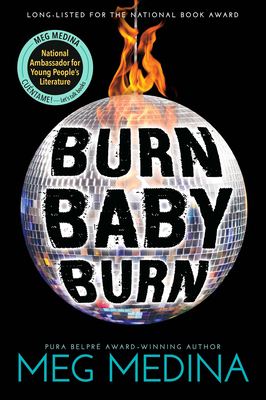 “Medina holds nothing back. . . . A devastatingly intense story, this work is a must-have for all collections.” — School Library Journal (starred review)

Meg Medina transports readers to a time when New York seemed balanced on a knife-edge, with tempers and temperatures running high: the infamous summer of 1977, when the city is besieged by arson, a massive blackout, and a serial killer named Son of Sam who shoots young women on the streets. Seventeen-year-old Nora Lopez’s family life isn’t going so well, either. Before she turns eighteen and can strike out on her own, Nora will discover that the greatest dangers are often closer than we like to admit — and the hardest to accept.
Meg Medina is the author I studied, and still study, to learn how to write for children. Her ear is impeccable; the way she captures not only dialogue but also communicates adolescent feelings without being condescending nor pitching extra soft softballs. Few people get the balance of writing about and for teens right.
—Elizabeth Acevedo, New York Times bestselling author

Rooted firmly in historical events, Medina's latest offers up a uniquely authentic slice-of-life experience set against a hazy, hot, and dangerous NYC backdrop. Rocky and Donna Summer and the thumping beats of disco, as well as other references from the time, capture the era, while break-ins, fires, shootings, and the infamous blackout bring a harrowing sense of danger and intensity . . . An important story of one of New York City's most dangerous times.
—Kirkus Reviews (starred review)

Medina uses Nora’s story to seamlessly connect readers to an unforgettable period in history, the setting leaving readers thirsting for more information about the summer of 1977. The character development is tight and accurately constructed. Medina holds nothing back, shedding light on the characters’ flaws, which teens today will be able to relate to. Medina is on point with the teen voices, evoking their intense fear, panic, and dreams. A devastatingly intense story, this work is a must-have for all collections, especially where Ruta Sepetys’s books are popular.
—School Library Journal (starred review)

This vividly evoked coming-of-age story is set against actual events in 1977 New York City...Nora is an empathetic character, and Medina depicts her troubled family and their diverse Queens neighborhood with realistic, everyday detail. Numerous references to New York’s budget crisis, arson wave, and “Son of Sam” newspaper stories deliberately ground the story in a real time and place, while an ample sprinkling of seventies disco and funk song references creates a brighter soundtrack for the dreams and romance of teenage girls, hinting at a hopeful future for Nora.
—The Horn Book (starred review)

Nora is strong and believable, a possible romance has heat, and Medina (Yaqui Delgado Wants to Kick Your Ass) gets gritty 1977 New York City right: feminism and disco in the air, Son of Sam, and—come July—the blackout and the ensuing looting and fires...elements in this coming-of-age story are elegantly and eloquently explored.
—Publishers Weekly

I don’t know if I’ve ever called a book “masterful” before, but I’m more than a little tempted.
—Kirkus Reviews

Historical fiction is sometimes a hard sell for contemporary teens; however, Medina’s novel entices readers by developing realistic characters and a strong plot framed by the turbulence of 1977 in NYC. At its heart, this is a novel about growing up. Nora struggles to find her identity outside of her family and make choices that will impact her future. There is a strong theme of feminism and redefining a woman’s role during that time in history. Nora’s outlook on relationships and life in general is frank but refreshingly honest...this novel is a strong choice for its message, characters, and historical perspective.
—VOYA

Medina steeps her narrator in a period world of wearing Sasson jeans, mourning for Freddie Prinze, and screaming at Carrie, but mostly it’s an atmosphere of palpable and excruciating tension for Nora as her family drama mirrors the external threat. Her feelings are believably complicated...While Nora’s milieu may be different, contemporary readers will respond to her doubt about the world’s and her own possibilities, and they’ll be glad to see her bravely moving forward nonetheless.
—Bulletin of the Center for Children's Books