Judy Moody and Friends: Prank You Very Much (Hardcover) 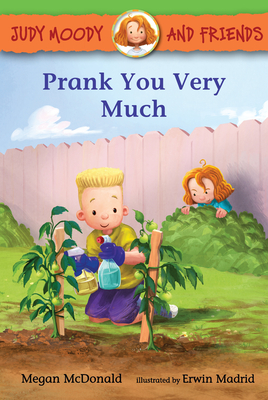 Judy Moody and Friends: Prank You Very Much (Hardcover)

This is book number 12 in the Judy Moody and Friends series.

Judy can’t wait for her mischief to bear fruit when Stink discovers that his backyard science project is an overnight success. Hardy-har-har!

Prankenstein strikes again! The Summer Science Showdown is just around the corner, and Stink is positive that he has the recipe for a winning entry. Soon he’s acting like a mad scientist, with strong-smelling potions in hand and visions of super tomatoes dancing in his head. Judy takes one look at her busy brainiac brother and sees a situation ripe for a little mischief! Everyone knows that Judy has never met a practical joke she doesn’t like, and soon the Princess of Pranks is cooking up a recipe of her own. From Megan McDonald comes an epic match of wits in a Judy Moody story perfect for newly independent readers.
Megan McDonald is the author of the popular Judy Moody and Stink series for older readers. She has also written many other books for children, including two books for beginning readers: Ant and Honey Bee: A Pair of Friends at Halloween and Ant and Honey Bee: A Pair of Friends in Winter. She lives in California.

Erwin Madrid has worked as a visual development artist for the Shrek franchise and Madagascar: Escape 2 Africa as well as creating conceptual art for video games. He is also the illustrator of The Scary Places Map Book by B. G. Hennessy. Erwin Madrid lives in California.