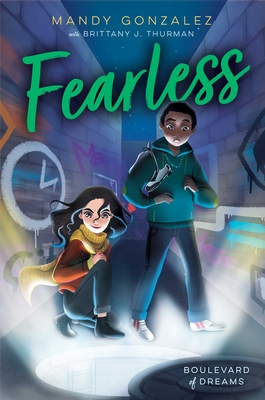 This is book number 2 in the Fearless Series series.

Better Nate than Ever meets Love Sugar Magic in this spooky second novel in the Fearless middle grade series from Hamilton and Broadway star Mandy Gonzalez about a group of young thespians who time travel back to 1950s Broadway.

Twelve-year-old Relly can’t wait for his beloved grandfather to finally see him on stage! Along with the rest of the Fearless Squad, Relly has just opened Our Time, a brand-new musical at the infamous Ethel Merman Theater. Though his grandfather would prefer his grandson pursue something more “practical,” Relly just knows when he sees the show, he will change his mind and come around on Relly’s love of theater and dance.

But right before their night show, a member of the Squad loses their phone down an open manhole. When the entire Squad goes down to help retrieve it, they find themselves in 1950s Manhattan. A big problem, considering the curtain goes up in about two hours—and over sixty years in the future!

With a series of clues, Relly discovers that his grandfather was a popular tap dancer, working the nightclub circuit and pursuing his dream of performing—something he’s been discouraging Relly from doing lately. Perhaps this accidental fall into a different time wasn’t so accidental after all. Can Relly help his grandfather and make it back in time for places in the show?
Mandy Gonzalez has thrilled audiences on Broadway, lit up the screen on television, been published in Harvard Business Review, and started a social movement. Currently starring as Angelica Schuyler in Hamilton on Broadway, she also recently appeared in Madam Secretary as recurring character Lucy Knox and is known for originating the role of Nina Rosario in the Tony Award­­–winning show, In the Heights. Mandy’s debut album, Fearless, reached #13 on the iTunes pop charts. Mandy is also an author—having published a widely cited article in the Harvard Business Review on how to overcome one’s fear of public speaking. Most dear to her heart, Mandy is the proud founder of #FearlessSquad—a social media movement for inclusiveness and belonging. The movement connects millions of people around the world, encourages them to be their best selves, and helps them empower each other.

Brittany J. Thurman is the author of Fly, from Caitlyn Dlouhy Books. Brittany holds an MFA in Dramatic Writing from Carnegie Mellon University. During her graduate years at Carnegie Mellon University, Brittany’s plays were produced in Aspen, Colorado, and on New York’s City’s Theatre Row. She is a graduate of Kingston University in London, England, where she spent several years studying theater. She is a former children’s specialist and museum educator, where she advocated for early literacy, reading hundreds of stories to thousands of children across Pittsburgh, Pennsylvania. Brittany currently lives in her hometown of Louisville, Kentucky, where she holds tight to her elders, her roots, and her childhood home. When Brittany isn't writing, you can catch her biking along Louisville’s waterfront, safely travelling, and spending plenty of time with her family.