Journey to America: Escaping the Holocaust to Freedom/50th Anniversary Edition with a New Afterword from the Author (Paperback) 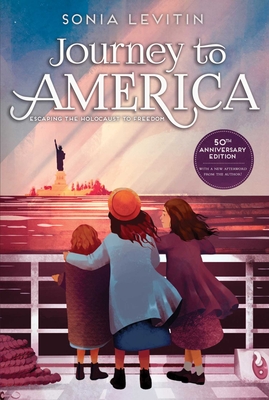 Journey to America: Escaping the Holocaust to Freedom/50th Anniversary Edition with a New Afterword from the Author (Paperback)

In 1938, Lisa Platt and her family know something dangerous is happening in Germany. Lately, there have been more and more restrictions for Jews: yellow stars they have to wear, schools they cannot attend, things they are forbidden to do. When their neighbors are arrested for petty reasons, the Platts realize they have to escape.

Forbidden to bring money or possessions out of the country, Lisa’s father secretly leaves for America, planning to work until he can send for them. But when conditions in Germany worsen, Lisa, her mother, and her sisters flee to Switzerland to wait, surviving on what little they have in a continent hurtling toward war.

Inspired by Sonia Levitin’s own experience of fleeing Germany as a child, this moving novel chronicles one family’s bravery in the face of aggression and apathy.
Sonia Levitin, like Lisa Platt, escaped from Germany in the late 1930’s. Among her acclaimed books for young readers are The Mark of Conte and The Return.
“Germany in the early days of the Nazis. Told from the viewpoint of a young Jewish girl and told mostly in dialog…it becomes more than just another journey: it becomes a vivid documentary of insane cruelty and limitless courage that will never be forgotten by anyone who reads it.”
— Publishers Weekly

"People being people give Journey to America a special glow."
— Kirkus Reviews

“A very moving though never maudlin story with good characterization and a fast pace, this novel will be a definite asset to any collection.”
— School Library Journal

“Commendably, neither issues nor ideals intrude on the reader abstractly, but emerge naturally from the human condition portrayed in the story.”
— Booklist