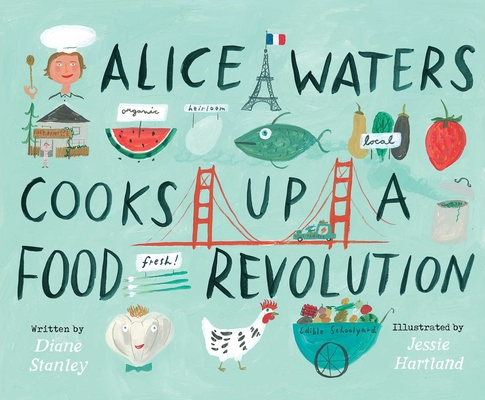 
In Stock—Click for Locations
From the team behind the acclaimed Ada Lovelace, Poet of Science comes a delicious nonfiction picture book biography about pioneering chef Alice Waters who kickstarted the organic food movement.

Whenever young Alice Waters tasted something delicious, like the sun-warmed berries from her family’s garden or a crisp, ripe apple picked straight from the tree, she would remember it for the rest of her life. Later, as she tasted many more wonderful foods, she realized what made them so good—they were fresh and ripe, grown or made the old-fashioned way.

When Alice grew up, she opened a restaurant called Chez Panisse. As part of her quest to make delicious food, Alice sought out small, local farmers to provide the meat, dairy, and produce. The restaurant made her famous, but it did much more than that—it started a food revolution. Today, home cooks and chefs alike are all discovering the simple secret to the Best! Food! Ever! This book is a celebration of food, cooking, and the woman whose curiosity and devotion to flavor kickstarted America’s interest in buying local, organic food.
Diane Stanley is the author and/or illustrator of more than sixty books for children, noted especially for her award-winning picture book biographies. She and Jessie Hartland recently collaborated on Ada Lovelace, Poet of Science, which was named an ALA Notable Book and an Amelia Bloomer Top Ten Book, among other accolades. Diane is the recipient of the Washington Post/Children’s Book Guild Award for Nonfiction for the body of her work. She lives in Santa Fe, New Mexico. You can visit her at DianeStanley.com.

Jessie Hartland is the author and illustrator many nonfiction titles for young readers, including Our Flag Was Still There, which was named a Bank Street Best Book of the Year. The New York Times praised her “joyful folk-art illustrations” in Harlem Grown, written by Tony Hillery. She has painted murals at a Japanese amusement park, designed Christmas windows for Bloomingdale’s, and put her mark on ceramics, watches, and all sorts of other things. She has done drawings for many magazines and newspapers, including The New York Times, Travel and Leisure Family Club, Martha Stewart Kids, and Bon Appétit. She lives in New York City. Visit her at JessieHartland.com.