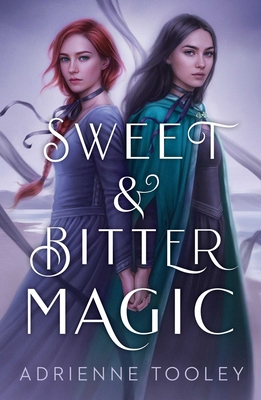 
Not On Our Shelves—Ships in 1-5 Days
In this charming debut fantasy perfect for fans of Sorcery of Thorns and Girls of Paper and Fire, a witch cursed to never love meets a girl hiding her own dangerous magic, and the two strike a dangerous bargain to save their queendom.

Tamsin is the most powerful witch of her generation. But after committing the worst magical sin, she’s exiled by the ruling Coven and cursed with the inability to love. The only way she can get those feelings back—even for just a little while—is to steal love from others.

Wren is a source—a rare kind of person who is made of magic, despite being unable to use it herself. Sources are required to train with the Coven as soon as they discover their abilities, but Wren—the only caretaker to her ailing father—has spent her life hiding her secret.

When a magical plague ravages the queendom, Wren’s father falls victim. To save him, Wren proposes a bargain: if Tamsin will help her catch the dark witch responsible for creating the plague, then Wren will give Tamsin her love for her father.

Of course, love bargains are a tricky thing, and these two have a long, perilous journey ahead of them—that is, if they don’t kill each other first.
Adrienne Tooley grew up in Southern California, majored in musical theater in Pittsburgh, and now lives in Brooklyn with her wife, six guitars, and a banjo. In addition to writing novels, she is a singer/songwriter who has currently released three indie-folk EPs. She’s the author of Sweet & Bitter Magic and Sofi & the Bone Song. You can find her online at AdrienneTooley.com.
"An especially slow-burn romance, as Tamsin’s curse prevents her from feeling, but the buildup allows for deeper character development and a very satisfying conclusion. Tooley’s debut skillfully and subtly emphasizes the consequences of prioritizing power above people and the environment while the friction between regular people and magic-bearers poignantly echoes the fear and rejection queer people, who are accepted in this world, often face in ours.... Thoughtful, ambitious, and unexpected."
— Kirkus