The Message: The Extraordinary Journey of an Ordinary Text Message (Hardcover) 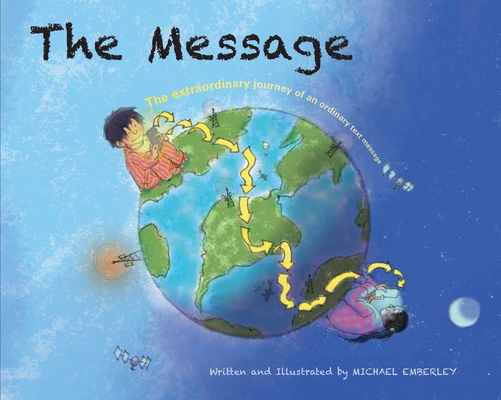 The Message: The Extraordinary Journey of an Ordinary Text Message (Hardcover)


In Stock—Click for Locations
Follow as a text message travels at near light speed around the world in this illuminating picture book about how our messages get from one phone to another, and connections they create between both people.

From your brain to your fingers to your phone, once you hit send, off your message goes on a journey that seems impossibly far: traveling through the air, underground, under oceans, and even through mountains, in seconds. Turns out texts are big on adventure, and this book explains exactly what they do and how. No planes, trains, or automobiles involved, but lots and lots of hair-thin fibers, ocean-length cables, and satellites!
Michael Emberley is the illustrator of many books for children including Barbara Bottner’s Priscilla Gorilla and Miss Brooks’ Story Nook. He knows a lot about cell phones and lives in Dublin, Ireland.

Michael Emberley is the illustrator of many books for children including Barbara Bottner’s Priscilla Gorilla and Miss Brooks’ Story Nook. He knows a lot about cell phones and lives in Dublin, Ireland.
Emberley tracks a loving mom’s text message to her child on its secondslong global journey.

What is going on in our brains, on our phones, and in the world when we send or receive a text message? Emberley’s skillfully crafted picture book answers this not-so-simple question with a delightful mix of illustrations, diagrams, and captions with a clear through-line narration that makes the complicated science behind our electronic interactions comprehensible. […] Readers will never again think the same way about the basic act of sending a text message.
— Horn Book Magazine *STARRED*

Emberley uses the example of a mother far away from her young son, texting him to tell him she
loves and misses him, to illustrate how a text message works. […] Full-page spreads describe how the boy receives his mother’s text and how his brain’s nerves command his fingers to type her a response. In seconds, the message travels as electromagnetic radio waves into the  electromagnetic field, moving through cell towers and then underground, through underwater copper-wire cables on its journey to its recipient. The book also has interesting STEM trivia—for instance, that there are five million cell towers in the world, or that per minute in the U.S. about 16 million text messages are sent. In the illustrations, readers are given a big-picture, bird's-eye view of what’s happening above- and belowground simultaneously as Emberley clearly illustrates a technical process in a way that curious readers will find fascinating.— Sharon Rawlins
— Booklist *STARRED*