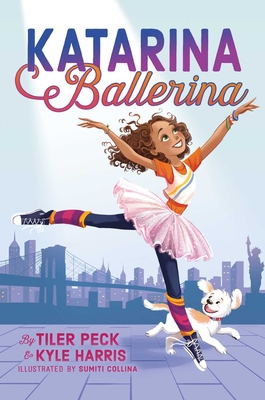 This is book number 1 in the Katarina Ballerina series.

Ten-year-old Katarina is a New York City girl through and through, but the buzz of the city drives her to feel that she is meant for more than her ordinary day to day routine. Her big dream? To become a prima ballerina.

With the help of a few new friends, Katarina finally puts on her first pair of ballet shoes and she’s more than determined to make it work. But her feet don’t quite move the way she would like them to, the twirls and spins make her dizzy, and her classmates aren’t exactly welcoming. When the head of the dance studio announces that there will be a competition to earn a spot in an upcoming international dance camp, Katarina knows this could be her big chance to make her dancer dreams come true. Does this tiny dancer have what it takes to stand out in the ballet world of blending in?
Tiler Peck is an international ballerina and has been a principal dancer with the New York City Ballet since 2009. She has been seen on Broadway in On the Town and The Music Man and originated the role of Marie in The Kennedy Center’s production of Little Dancer, alongside Kyle Harris. Ms. Peck performed for President Obama at the 2012 and 2014 Kennedy Center Honors. Ms. Peck has guested on Dancing with the Stars twice, and recently appeared on Julie Andrews’s Netflix series, Julie’s Greenroom. She is a recipient of the 2013 Princess Grace Statue Award and was named one of Forbes 30 under 30 in Hollywood/Entertainment. Most recently, she was the first woman to curate three performances titled Ballet Now at the Los Angeles Music Center and is the subject of a new documentary directed by Steven Cantor and produced by Elisabeth Moss for Hulu. She lives in New York City with her dog Cali. To learn more about Tiler, follow her on all social media platforms @TilerPeck.

Kyle Harris is an actor in New York City. He recently starred in Freeform’s hit series Stitchers for three seasons and has appeared on Broadway in The Inheritance and Sondheim on Sondheim. Kyle toured the country as Tony in the Broadway National Tour of West Side Story and starred opposite Tiler Peck in the Broadway bound musical Little Dancer at the Kennedy Center in Washington, DC. Kyle has also appeared on The Carrie Diaries and Beauty and the Beast on the CW, HBO’s High Maintenance, NBC’s The Blacklist Redemption, and God Friended Me on CBS. He has a BFA in musical theater from the University of Arizona and is the son of a second-grade teacher. If it weren’t for his mother introducing him to children’s books at a young age, he knows he wouldn’t be as well rounded and successful in the arts as he is today. To learn more about Kyle, follow him on all social media platforms @KyleHarris.

Sumi Collina is a magenta-haired illustrator based in Italy. She’s been creating since the moment she decided that drawing was better than bruising her knees while playing with the other kids. She worked as a pixel artist for three dress-up websites before moving to Rome to study illustration. Sumi now works freelance, illustrating children’s books, proposal scenes for young couples (again, lots of bruised knees), and card games. She now lives with a family of three very rustic dogs. As a dog owner, she is very passionate towards donating towards animals in need around the world.