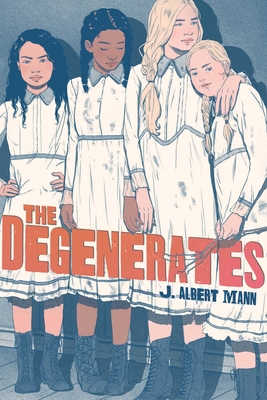 
In Stock—Click for Locations
“Respectful, unflinching, and eye-opening.” —Kirkus Reviews
“Historical fiction that not only depicts a cruel, horrifying reality but also the strength and courage of the people who had to endure it.” —Booklist

In the tradition of Girl, Interrupted, this fiery historical novel follows four young women in the early 20th century whose lives intersect when they are locked up by a world that took the poor, the disabled, the marginalized-and institutionalized them for life.

The Massachusetts School for the Feeble-Minded is not a happy place. The young women who are already there certainly don’t think so. Not Maxine, who is doing everything she can to protect her younger sister Rose in an institution where vicious attendants and bullying older girls treat them as the morons, imbeciles, and idiots the doctors have deemed them to be. Not Alice, either, who was left there when her brother couldn’t bring himself to support a sister with a club foot. And not London, who has just been dragged there from the best foster situation she’s ever had, thanks to one unexpected, life-altering moment. Each girl is determined to change her fate, no matter what it takes.
J. Albert Mann is the author of several middle grade and young adult novels, including The Degenerates and What Every Girl Should Know. She has an MFA from Vermont College of Fine Arts in writing for children and young adults. She prefers books with unhappy endings to happy ones. Visit her at JAlbertMann.com.
“The author portrays the movement's prejudice, racism, and violence with brutal realism; an author's note explains that the doctors' dehumanizing dialogue comes verbatim from real medical notes. Crucially, she reminds readers that such prejudice still exists. . . . Respectful, unflinching, and eye-opening.”
— Kirkus Reviews

“Mann details the casual cruelty of the administration and the blatant racism and prejudice (one girl is African American, another physically disabled) underlying their medical assessments, but she interjects the bleakness with glimmers of hope, from Maxine and Alice’s relationship to London’s caring for the institute’s babies to Rose’s resilience even in the face of serious illness. . . . Somberly poignant.”
— BCCB

“This is the kind of historical fiction that not only depicts a cruel, horrifying reality but also the strength and courage of the people who had to endure it. Mann effectively renders the details of a time and place, but more important, has created four complex characters who draw strength and inspiration from one another. With its examination of disability, prejudice, abuse, and resiliency, this will change the way readers look at how labels are used, as well as how they're wielded.”
— Booklist
For This Book...
Video