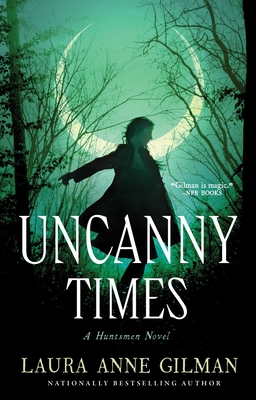 
On Our Shelves Now at:
Huntsmen, according to the Church, were damned, their blood unclean, unholy. Yet for Rosemary and Aaron Harker the Church was less important than being ready to stand against the Uncanny as not being prepared could lead to being dead.

The year is 1913. America—and the world—trembles on the edge of a modern age. Political and social unrest shift the foundations; technology is beginning to make its mark.

But in the shadows, things from the past still move. Things inhuman, uncanny.

And the Uncanny are no friend to humanity.

But when Aaron and Rosemary Harker go to investigate the suspicious death of a distant relative, what they discover could turn their world upside down—and change the Huntsmen forever
Laura Anne Gilman is the author of the Locus bestsellers Silver on the Road and The Cold Eye, the popular Cosa Nostradamus books (the Retrievers and Paranormal Scene Investigations urban fantasy series), and the Nebula Award–nominated The Vineart War trilogy. Her first story collection is Dragon Virus, and she continues to write and sell short fiction in a variety of genres. Follow her at @LAGilman or LauraAnneGilman.net.