The Worlds of Tomie dePaola: The Art and Stories of the Legendary Artist and Author (Hardcover) 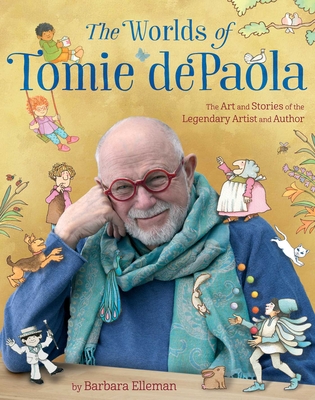 The Worlds of Tomie dePaola: The Art and Stories of the Legendary Artist and Author (Hardcover)


In Stock—Click for Locations
Barbara Elleman’s insightful biography on Tomie dePaola captures the essence of the beloved author-illustrator through engaging stories, childhood photos, countless illustrations, and thoughtful analysis of decades of celebrated books.

Tomie dePaola is one of the best-known and most beloved creators of books for children. His art and his stories, which are filled with imagination, humor, grace, and curiosity, represent a love of life that is reflected in everything he does.

Barbara Elleman’s exploration of Tomie dePaola’s career takes a fascinating look at the many worlds dePaola has brought to life through his work: from autobiographical memories to folktales, religious stories, nursery rhymes, and more—including, of course, the inventive world of his most famous character, Strega Nona. Originally published in 1999 and filled with evocative artwork, captivating photographs, and heartwarming anecdotes, this comprehensive book has been updated to cover two new decades of dePaola’s creativity. Elleman’s thoughtful narrative brings a fresh appreciation to the work of a unique author-illustrator, one who is a true legend of children’s literature and a source of lasting joy for generations of readers, young and old.
Before being named Distinguished Scholar of Children’s Literature at Marquette University, Barbara Elleman served as editor of the children’s section of Booklist magazine and then as editor-in-chief of Book Links, both published by the American Library Association. Prior to that, she worked as a school library media specialist and as a public librarian. She has been a judge for the American Book Awards among others and served on the 2000 Caldecott committee and twice on the Children’s Literature Legacy Award committee (2003 and 2009). In 1999, Putnam published her first book, Tomie dePaola: His Art and His Stories. Following that, she coauthored (with Russell Freedman) Holiday House: The First Sixty-Five Years (2000), and Virginia Lee Burton: A Life in Art (Houghton, 2002). In relocating to Massachusetts, Barbara donated her thousand-plus, often-signed picture book collection to The Eric Carle Museum of Picture Book Art, where her substantial reference collection about children’s literature resides in the Barbara Elleman Research Library, referred to as the BERL.
*** "Numerous full-color photographs of dePaola’s home and studio offer an intimate glimpse into his craft and style; and the inclusion of first drafts, character sketches, color experiments, and final layouts further illuminate his creative process. Comprehensive and elegant with generous back matter, this rich resource...will be welcomed by aspiring picture-book creators as well as dePaola’s numerous fans." - Booklist starred reivew

*** "An illuminating, lavishly illustrated tribute to the works and talents of an iconic writer and illustrator, revised and updated in the wake of his death in March 2020...an essential guide to the legacy of a well- and deservedly loved artist." - Kirkus starred review