Cyber Fraud: The Web of Lies: US Marine Risks Life in Prison To Expose a Cybercrime That Consumers Know Nothing About (Paperback) 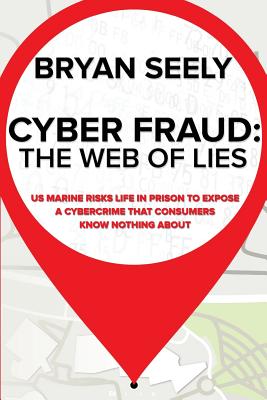 Cyber Fraud: The Web of Lies: US Marine Risks Life in Prison To Expose a Cybercrime That Consumers Know Nothing About (Paperback)


Not On Our Shelves—Ships in 1-5 Days
(This book cannot be returned.)
US Marine Risks Life in Prison to Expose a Cybercrime that Consumers Know Nothing About. In Cyber Fraud: The Web of Lies, cybersecurity expert Bryan Seely exposes a criminal underworld that has taken root and spread all over the globe. These criminals have set up shop in every city in the United States, and most major cities on 6 continents and hide behind consumer ignorance. Bryan Seely began his quest to expose this system of fraud in late 2013 and in February of 2014, demonstrated a flaw on Google Maps that these criminals use to commit these crimes. To prove his point, he Wiretapped the Secret Service in Washington, D.C. and the FBI in San Francisco. Yes, he actually intercepted calls to the Secret Service and FBI. In Cyber Fraud, Bryan details everything about the scam and recounts his experience fighting to expose these criminals. Learn what you can do to protect yourself so you don't become one of the millions of victims worldwide.
Bryan Seely is a world famous cyber security expert, ethical hacker, author and former U.S. Marine. Seely is known for intercepting calls to the United States Secret Service and FBI by hacking Google Maps in early 2014, but rather than spending time in prison he was called a hero and moved on to bigger and better things. A few months later, he found an exploit in LinkedIn.com and helped the company resolve it. In August of 2014, Seely and another security expert de-anonymized the highly valued mobile app, Secret. He was on the front page of Wired.com, CNNMoney, CNET, Forbes and the Washington Post - all in the same day. The high profile hacking of Secret.ly landed Seely a consulting gig with Secret less than a week later, and Mark Cuban personally contacted the duo to provide mobile application security/ethical hacking services for his newest tech investment, Cyberdust. In a rare interview, Mark Cuban spoke with NYTimes best-selling author and journalist Brian Krebs and provided a glowing endorsement of Seely and his team. "I like working with them. They look to help rather than exploit. We have learned from them and I think their experience will be valuable to other app publishers and networks as well." Seely then helped reveal a huge number of data breaches at several hundred major institutions which prevented the theft/loss of substantial amounts of money and information; including over 9 million social security numbers, and $23 billion in managed funds at MBIA. Seely currently runs his own security company & blog called SeelySecurity.com. He is also the Chief Information Security officer of J4 Capital which is an advanced financial services company specializing in market analysis and forecasting. Bryan Seely is ramping up promotion of his new book titled Cyber Fraud: The Web of Lies in which Seely details his unbelievable story of how he intercepted calls to the Secret Service and FBI without permission, yet did not spend one minute in jail.