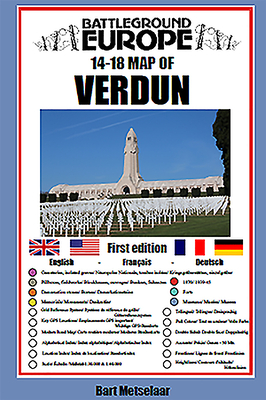 
Special Order—Subject to Availability
Comprehensive mapping for the Battle of Verdun 1916 and a sizable part of the early days of the Meuse-Argonne Offensive 1918. Clearly produced in full color, with different types of feature in different colors, all supported by two comprehensive keys.

For many years the Holts have provided tourers to the battlefields with excellent mapping for the Ypres Salient and the Somme. This map of the Verdun/Meuse area fills one of the many gaps in the coverage of the Western Front.

This map of the Verdun battlefield is in the same style, using a color coded system to distinguish the different types of features. It includes some 300 locations of memorials, cemeteries, significant remnants of the battle terrain, remaining fortifications, trenches, the destroyed villages and other vestiges of the war. On the reverse there is a cut out and enlarged section of the Verdun battlefield in particular - the most visited part of the area, which provides greater detail. This section includes the Ossuary at Douamont, Forts Douamont, Vaux and Souville and many more features.

The front line at key stages of the battle in 1916 is clearly indicated.

GPS references are given for the more significant sites. Roads and major tracks are shown, with restrictions in access as known at the date of publication.

The map extends from the eastern fringes of the Argonne Forest to the west and encompasses the whole of the 1916 Verdun battlefield to the east. This means that several places of interest to the student of the American army's offensive in late 1918 are shown.

The map is trilingual - in English, French and German - so far as is practicable given the constraints of space. The map is of a manageable size, both in a vehicle and when being used outside.