From Prejudice to Pride: A History of LGBTQ+ Movement (Paperback) 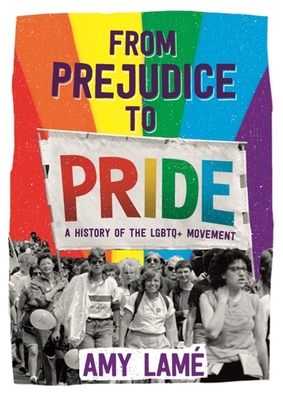 From Prejudice to Pride: A History of LGBTQ+ Movement (Paperback)

A rare and inspiring retelling of the LGBTQ+ movement's struggle for civil rights.

From Prejudice to Pride looks at the rise and achievements of the LGBTQ+ movement and the different communities, pioneers and stories of heartbreak and courage that have marched alongside it.

Perfect for readers aged 11 and upwards, this book will inspire courage and pride in young LGBTQ+ people and help answer questions for all readers interested in gender and identity.

Follow LGBTQ+ history from ancient civilisations to the present-day, and learn about key events including the trial of Oscar Wilde, the Stonewall riots, the AIDS crisis, same-sex marriage and changing laws that have impacted on LGBTQ+ life. Gain insight into the shifting attitudes that have challenged lesbian, gay, bisexual and transgender people and the experiences that help us understand what it means to be LGBTQ+ today.

Filled with photographs documenting LGBTQ+ life from the past and present, and from around the world.

Amy Lamé is a writer, broadcaster, activist, and performer.

She co-founded RVT Future, a voluntary LGBTQ+ community group campaigning to preserve the iconic Royal Vauxhall Tavern. Amy is the 2014 recipient of the Free Derry Pink Wall Award for her work for LGBTQ+ civil rights.

Amy is a familiar presence on TV, in print and on radio. Originally from New Jersey, she has been a proud Londoner for over two decades. She currently serves as the Mayor of London's first Night Czar, overseeing the city's thriving night time economy and culture.

A useful book on an increasingly talked about subject that is still prone to misinformation and ignorance.—The School Librarian