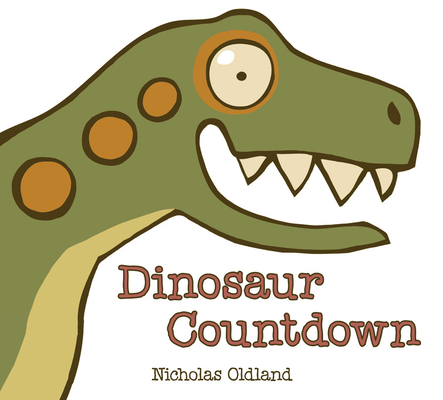 
In Stock—Click for Locations
In this simple and clever picture book from Nicholas Oldland, small children will have fun counting backward, as they're introduced to different dinosaurs grouped from ten to two, and a final, single dinosaur. Then, in a unique twist, the book goes on to “zero” dinosaurs as well (because “they're extinct, silly!”). Each number gets its own two-page spread, where it is both written as a numeral and spelled out as a word within the illustration's description (for example, “ten striding velociraptors”). The dinosaur names are appropriately long and tongue-twisting, one of the things young children love about dinosaurs --- but not to worry, there's a pronunciation guide at the end of the book! And the dinosaurs are all actively engaged, “sauntering” and “soaring,” “rearing” and “roaring.” A couple of spreads offer clues to something extra on the page to search for (a “looming predator” on one, “and what's that flying overhead?” on another), to keep the counting activity fun and not too repetitive.

Oldland's fresh, playful and lively artwork will keep young eyes engaged, an important task as they begin to learn to count. This book is an excellent choice for an interactive preschool or kindergarten early numeracy or counting lesson. It also works for first lessons on prehistoric animals or on animal biology in general (herbivores and carnivores are both mentioned, for example). And it makes a terrific vocabulary stretcher, as children use visual cues to figure out what it means that a tyrannosaurus is “towering” or a stegosaurus is “lumbering.”
Nicholas Oldland earned a degree in fine arts at Mount Allison University in New Brunswick, Canada, and enjoyed success as a commercial artist and filmmaker before taking up the role of creative director at Hatley/Little Blue House, a popular apparel company. He lives in Toronto, Ontario, with his family.
... Oldland both emphasizes an important mathematical concept and the scientific concept of extinction. A worthy addition to the dinosaur collection.—Booklist

This title works as a concept book about counting and as a nonthreatening intro to dinos.—School Library Journal

... an excellent home purchase, and it should be in all library collections serving the preschool crowd.—CM Magazine