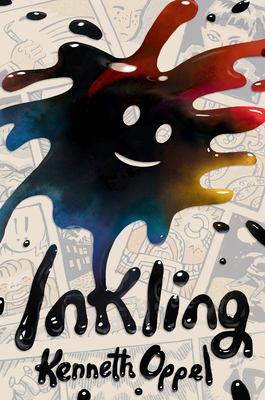 A brilliantly funny, highly illustrated story about how a little ink splot changes a family forever. Perfect for those who love Hoot, Holes, or Frindle!

The Rylance family is stuck. Dad's got writer's block. Ethan promised to illustrate a group project at school--even though he can't draw. Sarah's still pining for a puppy. And they all miss Mom.

Enter Inkling. Inkling begins life in Mr. Rylance's sketchbook. But one night the ink of his drawings runs together--and then leaps off the page! This small burst of creativity is about to change everything.

Ethan finds him first. Inkling has absorbed a couple chapters of his math book--not good--and the story he's supposed to be illustrating for school--also not good. But Inkling's also started drawing the pictures to go with the story--which is amazing! It's just the help Ethan was looking for! Inkling helps the rest of the family too--for Sarah he's a puppy. And for Dad he's a spark of ideas for a new graphic novel. It's exactly what they all want.

It's not until Inkling goes missing that this family has to face the larger questions of what they--and Inkling--truly need.

• A New York Times Notable Book
• A New York Public Library Best Book of the Year -- top ten selection
• "A true-to-life family, some can't-put-it-down excitement, a few deep questions, and more than a little bit of magic. This book is everything, and I loved every page." —Rebecca Stead, Newbery Medalist for When You Reach Me
KENNETH OPPEL is one of the most highly regarded authors of middle-grade fiction writing today. Among his books is the 2015 middle-grade novel The Nest, which received six starred reviews, was the Canadian Library Association's 2016 Book of the Year, a New York Times Editors' Choice, and was included on several notable "Best of 2015" lists, as well as Airborn, a 2005 Printz Honor Book. Find him online at www.kennethoppel.ca and @KennethOppel.

SYDNEY SMITH is the illustrator of many award-winning picture books, including Smoot, A Rebellious Shadow by Michelle Cuevas, Sidewalk Flowers by JonArno Lawson, and Town is by the Sea by Joanne Schwartz, for which he was awarded the Kate Greenaway Medal. Sydney lives with his family in Toronto, Canada. You can find him on Twitter @Sydneydraws.
Praise for INKLING!

"This masterful novel is funny, sad, and profound all at once. Kenneth Oppel has created many unusual protagonists during his stellar career, but his inventiveness reaches a whole new level with Inkling, an inkblot that is fully and vividly alive." —Quill and Quire, Starred

"Inkling is at turns hilarious, when he mimics the language of the books he reads, and poignant, when he wonders about his identity and purpose. The undercurrent of loss and grief, not to mention questions of agency and personhood, give the story weight, but do not weigh it down. Smith's energetic and expressive ink drawings are the perfect complement and contribute to the storytelling in playful ways. Oppel’s latest is
serious fun." —Booklist

"A unique story about the creative process and the journey through grief." —SLJ

"Inkling is so clever and intriguing that it deserves a bookshelf all to itself. Once you're done reading, you'll want to keep a very close eye on it." —Carl Hiaasen, Newbery Honor Winner for Hoot

"Inkling’s evolving abilities model a realistic creative arc—the creature mimics its most recent literary meal (“I’M UTTERLY ENRAPTURED” follows a stint with L.M. Montgomery) until it eventually discovers its own voice—even as the other characters work through grief and find their own stories."—Publishers Weekly

"An enjoyable read for budding young artists." —The Bulletin