This Is Our Constitution: Discover America with a Gold Star Father (Hardcover) 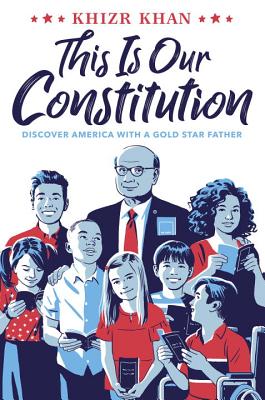 This Is Our Constitution: Discover America with a Gold Star Father (Hardcover)


Special Order—Subject to Availability
From Gold Star father and beloved Democratic National Convention speaker Khizr Khan comes a book for young people about the Constitution—what it says and why it matters for everyone.

Our Founding Fathers created the U.S. Constitution and Bill of Rights as a blueprint for American government and the rights of American citizens. This document is not merely a piece of parchment but a living, breathing promise of our deepest democratic values.

Khizr Khan grew up in Pakistan, with few of the fundamental rights that are enshrined in the Constitution. He immigrated to America and became a citizen, raising his family to appreciate and honor all our nation has to offer. Khizr Khan is deeply passionate about the Constitution: the guarantees and protections it provides for each and every person and the beacon of light it shines throughout the world.

This Is Our Constitution is a personal journey that Khizr Khan is taking with our nation’s young people.

The book includes:
* A highly personal introduction and conclusion
* Notes throughout that share Khizr Khan’s reflections on and connections to the U.S. Constitution
* The fascinating history of why and how the Constitution was written
*Article by article and section by section, an easy-to-follow explanation of what the Constitution means
* A closer look at key amendments, including the Bill of Rights, and pivotal Supreme Court decisions
* The complete texts of the Declaration of Independence and the Constitution

This is a book about why the Constitution matters to you, and us all.
KHIZR KHAN was born in 1950, the eldest of ten children, in rural Pakistan. He moved to the United States with his wife Ghazala, in 1980. The couple became American citizens and raised their three sons in Silver Spring, Maryland. Their middle son, U.S. army captain Humayun Khan, a graduate of the University of Virginia and its Army ROTC program, was killed in 2004 while stopping a suicide attack near Baqubah, Iraq. He was posthumously awarded a Purple Heart and a Bronze Star. Khizr Khan holds a BA degree from Punjab University, an LLB from Punjab University Law College, and an LLM from Harvard Law School. He is a member of the bar of the United States Supreme Court; the Washington, D.C., State Bar; the New York State Bar; and the American Bar Association. The focus of Khan's legal practice is on complex civil litigation, electronic discovery, health privacy compliance law, and civil rights and veterans' rights advocacy. He and Ghazala live in Charlottesville, Virginia.
Praise for This Is Our Constitution:

"Khan’s optimism and dedication to the ideals of America’s Founding Fathers infuse this inspiring and instructive work." —Publishers Weekly

"An optimistic picture of our progress toward promoting a more perfect union." —Kirkus Reviews