Felidia: Recipes from My Flagship Restaurant: A Cookbook (Hardcover) 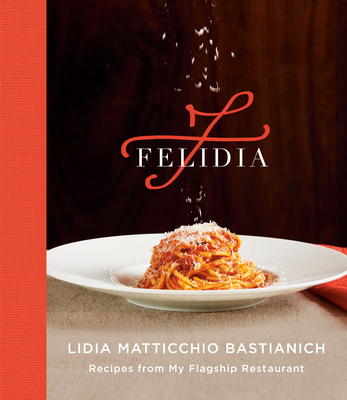 Felidia: Recipes from My Flagship Restaurant: A Cookbook (Hardcover)


Not On Our Shelves—Ships in 1-5 Days
The beloved chef and best-selling author shares, for the first time, the timeless recipes that have made her flagship restaurant, Felidia, a New York City dining legend for almost four decades.

Ever since it opened its doors on Manhattan’s Upper East Side in 1981, Felidia has been revered as one of the best Italian restaurants in the country. In these pages, Lidia and longtime Executive Chef Fortunato Nicotra share 115 of the recipes that capture the spirit of the Felidia menu past and present. From pastas and primi to appetizers and meats, and from breads and spreads to sides and soups, these are some of Lidia’s absolute favorite dishes, lovingly adapted for home cooks to re-create in their own kitchens.

Here are recipes for old-school classics such as Pasta Primavera and Linguine with White Clam Sauce and Broccoli. Contemporary favorites include Pear and Pecorino Ravioli, Chicken Pizzaiola, Short Ribs Braised in Barolo, and Eggplant Flan with Tomato Coulis. Exquisite dessert recipes include Warm Nutella Flan, Open Cannolo and Limoncello Tiramisù, while Passion Fruit Spritz and Frozen Peach Bellini come from the restaurant’s lively bar. Felidia is a beautifully illustrated, full-color cookbook that takes readers behind the scenes of the restaurant’s storied history and is filled with the same warmth and hospitality that are the hallmark of all of Lidia’s cookbooks. It’s the next-best thing to enjoying an evening out at this award-winning eatery!
LIDIA MATTICCHIO BASTIANICH is the author of fourteen previous cookbooks and the Emmy award-winning host of public television's Lidia's Kitchen, which also airs internationally. She is also a judge on MasterChef Junior Italy and Italy's highly rated daily program La Prova del Cuoco. Lidia owns Felidia, Becco, and several other restaurants, and is a partner in the acclaimed Eataly. TANYA BASTIANICH MANUALI is integrally involved in the production of Lidia's Public Television series as an owner and executive producer of Tavola Productions, and is active daily in the family restaurant business. She oversees the production and expansion of LIDIA'S food line alongside her husband, Corrado, and has coauthored several cookbooks with her mother, and one with her brother, Joe. FORTUNATO NICOTRA has been the executive chef at Felidia since 1995.
“Straightforward, honest, simple but sophisticated, and utterly delicious, Felidia is my type of food. From the ossobuco to homemade ricotta to mushroom gratin, these satisfying dishes will never fail to please your family or your friends.” —Jacques Pépin

“I have enjoyed the creative and soulful cooking at Felidia for more than three decades. Lidia was the first to really bring us authentic regional Italian food in New York. Her recipes in this book are rustic, delicious, and perfect for the home cook.” —Daniel Boulud

“For those who want to craft the kind of delizioso Italian delights one finds at the chef’s flagship New York restaurant, Felidia, [Lidia] Bastianich serves up more than 100 signature recipes she’s spent 38 years perfecting: Istrian-inflected dishes both sophisticated and homespun.” —O, The Oprah Magazine

“As a longtime foodie, I will treasure Felidia. The recipes are sure to become family staples. No one gets to the heart of Italian food like Lidia Bastianich.” —Debbie Macomber,#1 New York Times best-selling author