Nothing Is Lost: Selected Essays (Hardcover) 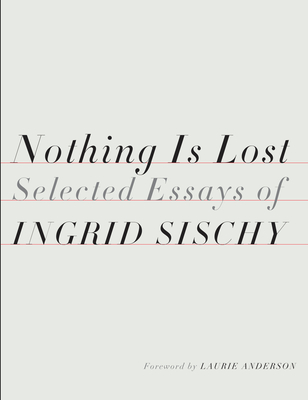 Nothing Is Lost: Selected Essays (Hardcover)


Special Order—Subject to Availability
From the late editor, writer, and critic, one of the great chroniclers of the art, fashion, and celebrity scenes: an expansive collection of thirty-five essays that offer an intimate look into the worlds of some of the most important and well-known artists, designers, and actors of our time.

For more than three decades, Ingrid Sischy's profiles and critical essays have been admired for their keen observation and playful style. Many of the pieces that appeared in The New York Times Magazine, The New Yorker, and Vanity Fair from the 1980s to 2015 are gathered here for the first time, including her masterful profiles of Nicole Kidman, Kristen Stewart, Miuccia Prada, Calvin Klein, Jeff Koons, Jean Pigozzi, Alice Neel, and Francesco Clemente, among others, as well as her exclusive interview with John Galliano after his career nose-dived in 2011. Whether writing about a young Alexander McQueen, the photography of Robert Mapplethorpe, Sebastião Salgado, Cindy Sherman, or Bob Richardson, or the Japanese musical theater group Takarazuka Revue, Sischy's close attention to the unexpectedly telling detail results in vividly crafted, incisive portraits of individuals and their works.

Here is a unique collection that gives readers unprecedented access to a dazzling range of artists from one of the greatest cultural critics of a generation.
INGRID SISCHY was a South African-born American writer and art critic who focused on art, photography, and fashion. She was the editor-in-chief of Artforum from 1980 to 1988, the editor-in-chief of Interview magazine from 1989 to 2008, a consulting editor at The New Yorker from 1988 to 1996, and a contributing editor to Vanity Fair from 1997 to 2015. She died in 2015.
“Ingrid was the sharpest person I have ever met with a pen that produced magic and truthful words.  Fear was never an option.  Truth was her driving force.  She was a journalistic tour de force and the world is a poorer place without her wisdom”
—Elton John

“For Sischy admirers, this is a treasure; for everyone interested in art journalism at its crisp, inquisitive, and resonant best, this is gospel.”
—Donna Seaman, Booklist

“Ingrid Sischy loved an Original, and she knew where to look.  Her central mission in these bold, vivid essays and profiles: discovering and championing.  She shares these artists and their art with us generously, humorously, always most eloquently.”
—Wes Anderson

“Sischy presents the New York art world not as an abstract nexus, but as a group of people who make art…The pieces are peppered with intimate anecdotes… [but] this intimacy doesn’t compromise Sischy’s critical eye… Nothing is Lost holds a wealth of insight, relayed by a warm, generous intelligence… and it is this, above all that makes Sischy’s writing so inviting.”
—Josie Mitchell, Times Literary Supplement

“The dense fog of seriousness that so often surrounds the worlds of fashion and art can be intimidating and at times, laughable. As her editor for almost two decades, I can say that what made Ingrid unique was not just her taste and compassion, but her ability to write about almost anything in a way that anyone, from the layperson to the most learned aficionado, could appreciate. Nothing is Lost is a compelling collection of her greatest hits that not only withstands the test of time, but also serves as a record of her perceptiveness and of her grasp of humanity’s enduring features.”
—Graydon Carter

“Ingrid’s authenticity, engagement, and radiance is everywhere present in this volume.  As I read the essays I hear her voice and feel the power of her gentle yet steely resolve.”
—Janet Malcolm, author of Forty-one False Starts: Essays on Artists and Writers